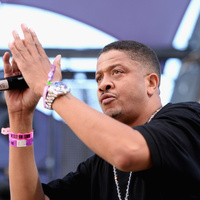 Chali 2na net worth: Chali 2na is an American rapper and hip hop artist who has a net worth of $3 million. Chali 2na was born in Chicago, Illinois in June 1971. He is a member of the group Jurassic 5 as well as a solo artist. Jurassic 5 formed in 1993 and released their self-titled debut studio album in 1998. They released the album Quality Control in 2000 and their 2002 album Power in Numbers reached #13 on the US R&B chart and #15 on the Billboard 200. Jurassic 5 released the album Feedback in 2006 which reached #6 on the US Rap chart, #12 on the US R&B chart, and #15 on the Billboard 200. Chali 2na has also collaborated with the band Ozomatli and was a founding member. His debut solo studio album Fish Outta Water was released in 2009. Chali 2na is known for his rapid delivery and his baritone voice.