Booba Net Worth: Booba is a French rapper who has a net worth of $14 million. Perhaps one of the most popular French musicians of the modern era, Booba has achieved international acclaim with his popular music. Although he is not particularly well-known outside of France, Booba has collaborated with a number of high-profile artists over the years. These include P. Diddy, 2 Chainz, and Rick Ross. Booba holds the distinction of being the most legally downloaded artist in French history, with over 10 million record sales as a solo artist.

Prior to his solo career, Booba gained notoriety as part of the duo Lunatic. The other member of Lunatic was Ali, his longtime friend. After a successful album in 2000, the pair went their separate ways in 2003 and became a successful solo artist. He carved out his own unique identity with high-quality beats and lyrics, but he has shrouded himself in controversy on numerous occasions. Outside of his solo career, Booba has established his own record label, clothing line, and jewelry line.

Early Life: Élie Yaffa was born on December 9th of 1976 in Sèvres, a suburban commune on the outskirts of Paris, France. Raised by a Senegalese father and a French mother in a Muslim household, Élie developed an interest in music from an early age. During the early 90s, Yaffa first ventured into the music scene as a breakdancer.

Career: By 1994, Booba had switched his focus towards music, and he teamed up with Ali to create Lunatic. No record label wanted to sign the pair due to their controversial lyrics, so they started their own independent label called 45 Scientific in 1999. A year later, they released the album "Mauvais Oeil." The album received widespread critical acclaim, but it would prove to be Lunatic's only official release before their split in 2003.

Even before Lunatic had broken up, Booba released his first solo album in 2002, entitled "Temps mort." During this period, Booba had the freedom to explore his own personal musical influences, including popular Western rappers of the early 90s. Throughout the next few years, Booba released a number of additional albums that highlighted his unique music style, typified by raw lyrics and dark melodies. These albums included "Pantheon," "Ouest Side," "0.9," and "Lunatic." All of these performed well commercially, although "Ouest Side" was his top performer. In 2012, he followed up with another album entitled "Futur." Booba has six gold albums, three platinum albums, and one double-platinum album to his name. He also won the 2011 "My YouTube" contest.

Other Ventures: Booba has created his own record label called Tallac Records. He has launched a number of clothing and jewelry lines, including Ünkut and DCNTD.

Controversies: In 2013, Booba was the subject of widespread cyber criticism from various corners for dedicating a song to victims of the Holocaust. In 2014, he proved to be a controversial figure once again when he seemed to praise Mohammed Merah, an antisemitic murderer who killed three children and a rabbi during a 2012 attack in Toulouse. These two diametrically-opposed incidents left many people scratching their heads.

In 2018, it was reported that Booba had been involved in a brawl with Kaaris, another French rapper at the airport in Paris. The brawl delayed flights by up to 30 minutes. Video footage shows the two men punching and kicking each other, and 11 people were arrested in connection to the incident.

In 2019, Booba's associates were the victim of an attack while filming one of his music videos in Paris. Gang members stormed the film set with guns and baseball bats, shooting off rounds and leaving several people injured. Booba was not there at the time of the attack. Also in 2019, it was announced that Kaaris and Booba were planning to organize a boxing match in order to settle their longtime feud. 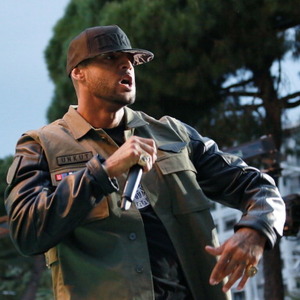