How much is Bone Thugs-n-Harmony Worth?

Bone Thugs-n-Harmony net worth: Bone Thugs-n-Harmony are an American hip hop group who have a collective net worth of $10 million dollars. Bone Thugs consists of rappers Krayzie Bone, Layzie Bone, Bizzy Bone, Wish Bone, and Flesh-N-Bone. They were signed by Eazy-E to Ruthless Records in 1993. Their first album Faces of Death was released in 1993 and the group has released nine studio albums. Their most popular hit "Tha Crossroads" was certified double platinum and topped the U.S. charts, as well as New Zealand. The group's other hits include "Thuggish Ruggish Bone", "1st of that Month", "Look into My Eyes", "If I could Teach the World", and "I Tried". All together they have sold more than 17 million records in the U.S. They won the 1997 Grammy Award for Best Rap Performance by a Duo or Group, and have also won two American Music Awards. They have been listed at #12 on About.com's "25 Best Rap Groups of All Time", and were named by MTV as "the most melodic hip-hop group of all time". Krayzie Bone and Wish Bone left the group in 2011 but returned in 2012. Layzie Bone stepped aside to work on his solo career in 2013. 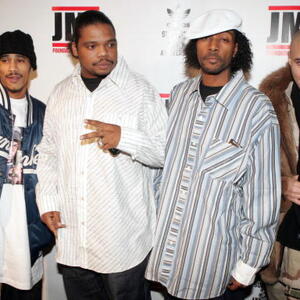