Blueface net worth: Blueface is an American rapper and songwriter who has a net worth of $4 million. In 2018 he became a viral internet meme after he released his music video "Respect My Crypn". His 2019 single "Thotiana" (featuring Cardi B and YG) is his most-successful song as of this writing, hitting #8 on the Billboard Hot 100.

Early Life: Blueface was born Jonathan Michael Porter on January 20, 1997 in Los Angeles, California. He grew up in the Santa Clarita Valley area then attended Arleta High School in the San Fernando Valley. For a time he lived in Oakland with his father. In high school he was a member of the marching band and football team. He was the school's starting quarterback in 2014 when the team won the East Valley League championship.

He began rapping, originally under the name "Blueface Bleedem" in January 2017. The name was a reference to the School Yard Crips street gang. According to legend, he was discovered after being invited to a friend's recording session to pick up a phone charger. Before leaving the studio he was challenged to rap battle. The resulting work eventually became the song "Deadlocs" which was uploaded to SoundCloud and gained a small following.

Success: In June 2018, now going by the shortened "Blueface", he released a full-length album titled "Famous Cryp". Thanks to the newly titled "Dead Locs", the album became popular around Southern California. The album also featured the original version of his single "Thotiana".

Blueface signed with Cash Money West in 2018 which is the West Coast branch of rapper Birdman's Cash Money Records label.

Blueface released the mixtape Two Coccy in 2018. Blueface has collaborated with other artists including G-Eazy, French Montana, Lil Tjay, and NLE Choppa.

Personal Life and Legal Issues: In November 2019 someone attempted to rob Blueface at a gas station. As the suspect drove off, Blueface fired his gun several times at the car. It is a felony in California to shoot at an occupied vehicle. He was arrested but release without pressing charges. In February 2019 he was arrested on a charge of felony gun possession after police found an unregistered gun in his possession. 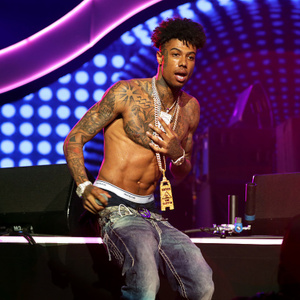