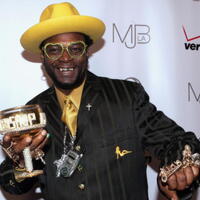 Bishop Don "Magic" Juan is a former pimp, and current hip-hop personality and fashion designer who has a net worth of $300 thousand. His net worth has been earned largely through his various endeavors within the entertainment industry, although he remains most famous for his former career as a pimp. That stage of Juan's life began when he was only 16 years old, and having been raised on a diet of movies that convey a somewhat glamorous portrait of the pimp lifestyle. During this phase in the 1970s, he operated a record store that was actually just a front for his pimping activities. In 1985, Juan retired from pimping claiming divine intervention: "God don't want me to do it no more." Shortly after that, he was ordained as a minister with the Christian Ministers Congress Non-Denominational Council, Inc. He became a mainstream figure after meeting rapper Snoop Dogg backstage at a concert, after which he became friends with the rapper and was even hired as Snoop's "spiritual adviser." Since then, he has been featured in various live rap shows, music videos, TV programs, and films along with established rappers such as Snoop Dogg, 50 Cent, and Da Brat. His most recent public appearance was in the 2011 song "Talent Show" by Snoop Dogg & Wiz Khalifa.