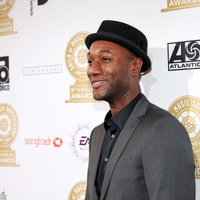 Aloe Blacc net worth: Aloe Blacc is an American rapper and songwriter who has a net worth of $5 million. Aloe Blacc was born Egbert Nathaniel Dawkins III in 1979 in Orange County, California. His musical career began with an interest in instruments and he started playing the trumpet in the third grade. Soon after, he became inspired by LL Cool J and began exploring the hip hop genre. He graduated from the University of Southern California in 2001 and launched his solo career a few years later with several EPs. He eventually signed with Stone's Throw Records, who released his first album "Shine Through," which was well-received by critics. His second album "Good Things" went double platinum with one track off the record becoming the theme song to HBO's "How to Make it in America". Blacc has been nominated for several awards, including Best International Male Soul Artist and Best International Breakthrough Act at the 2012 Brit Awards. He is closely connected with the charity Malaria No More, which seeks to provide education and assistance to those most affected in Africa. Blacc is married with children to Maya Jupiter, an Australian-born rapper.