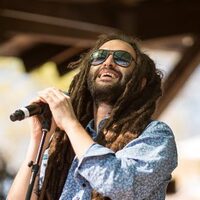 Alborosie Net Worth: Alborosie is an Italian reggae artist who has a net worth of $4 million dollars. A reggae artist, Alborosie was originally a member of the Italian reggae group, Reggae National Tickets, before deciding to go solo and moving to Jamaica to record and produce full-time. He has released six albums and is known for his hit songs, "Rastafari Anthem" and "Kingston Town", among others. Born in Marsala, Sicily, Italy on July 4, 1977, Alborosie's full name is Alberto D'Ascola. He became active in the music industry in 1993 and has been affiliated with Greensleeve Records. He was fifteen when he took an interest in music and was known to the public as Stena with his reggae band, Reggae National Tickets. He took to a solo career in 2001 and moved to Jamaica. He began working with names such as Ky-Mani Marley and Gentleman, doing audio engineering and working as a producer. He is part of the Rastafari movement and released ten albums throughout his solo career. In 2011 he won the award for Best Reggae Act at the MOBO Awards.