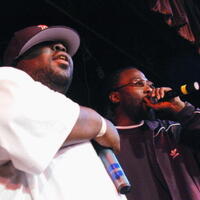 8Ball & MJG Net Worth: 8Ball & MJG are an American hip hop duo who have a net worth of $15 million dollars. Premro Smith, a.k.a. 8Ball, and Marlon Jermaine Goodwin, a.k.a. MJG, were born in Memphis, Tennessee, and met in the '80s while attending Ridgeway Middle School. In 1991, they released their first album, "Listen to the Lyrics", on the underground scene. That effort was followed up by the commercially-successful "Comin' Out" in 1993. Soon, they garnered a reputation as some of the best rap artists in the southern United States. Their 1995 album, "On Top of the World", climbed to number eight on the Billboard charts and went gold. The album produced their first charting single, "Space Age Pimpin'." During the late '90s, they each attempted to release solo albums before teaming up in 1999 for "In Our Lifetime, Vol.1" and again in 2000 for "Space Age 4 Eva". They have collaborated with popular artists, including Wu-Tang Clan, Fat Joe, and Biz Markie, and worked on the compilation CB, "America is Dying Slowly", in order to raise AIDS awareness. In 2005, they were featured on Three 6 Mafia's "Stay Fly", which climbed to number thirteen on the charts – the biggest single success of 8Ball & MJG's career. Both men run their own record labels and continue their solo careers. Between 1991 and 2010, 8Ball & MJG released ten studio albums.