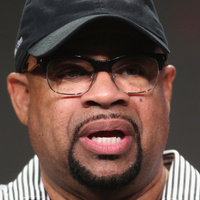 Russ Parr net worth: Russ Parr is an American radio and television personality who has a net worth of $4 million. Russ Parr was born in California in 1959. He started his career as a Production Services Director for ABC TV. Parr also performed stand-up comedy and opened for Joan Rivers. He appeared in episodes of the TV series Martin and Jenny Jones and in commercials for McDonald's, Thrifty's, and Kodak. In 1989 he left Hollywood to become a disc jockey in Dallas, Texas. He owned and ran his own recording label called Rapsur Records and recorded under the name Bobby Jimmy with his band Bobby Jimmy and the Critters. The group was recognized as part of the original N.W.A. posse and credited on their first album. He moved to Washington D.C. in 1996 to work at Radio One's 93.9 WKYS-FM where he started the Russ Parr Morning Show with Olivia Foxx. In 2002 the show went national. Parr directed the 2006 movie The Last Stand. He currently hosts the Russ Par Morning Show which is heard by more than three million listeners in 45 cities across the U.S. He also co-hosts the TV One dating show Get The Hook Up and the weekend radio show On Air with Russ Parr.