How much is Paul Harvey Worth?

Paul Harvey net worth and salary: Paul Harvey was an American radio broadcaster who had a net worth of $150 million at the time of his death in 2009. Paul Harvey was born in Tulsa, Oklahoma in September 1918 and passed away in February 2009. He worked for the ABC Radio Networks. Harvey was known for his News and Comment broadcast as well as his segments The Rest of the Story. His radio programs reached more than 20 million people a week from 1952 to 2008. His Paul Harvey News was broadcast on 1,200 radio stations as well as on 400 American Forces Network stations and 300 newspapers. Harvey authored several books including Paul Harvey's The Rest of the Story. He was elected to the National Association of Broadcasters National Radio Hall of Fame and received a Presidential Medal of Freedom. He started out in radio when he helped clean up a station at 14 years old. Paul Harvey passed away on February 28, 2009 at 90 years old. 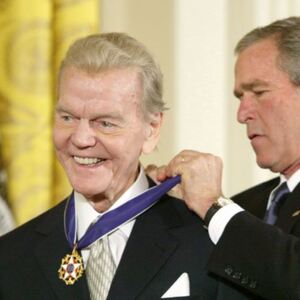