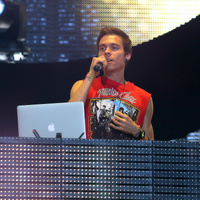 Matthew Koma net worth: Matthew Koma is an American singer, songwriter, DJ, and record producer who has a net worth of $25 million. That is a combined net worth with his wife, actress Hilary Duff.

Matthew Koma was born in Seaford, New York in June 1987. He released the extended plays Parachute in 2012 and The Cherrytree Sessions in 2013. Koma's single "Kisses Back" reached #1 in Romania and #10 in Poland. Matthew Koma was featured in the #1 songs on the US Dance chart "Spectrum" by Zedd and "Find You" by Zedd featuring Miriam Bryant. He has collaborated with several artists including Alesso, Hardwell, Showtek, Justin Prime, Tiesto, Far East Movement, Afrojack, Steve Aoki, Giorgio Moroder, Flux Pavilion, and more. Matthew Koma has written songs for many artists including for Zedd, Carly Rae Jepsen, Kelly Clarkson, Hilary Duff, Shania Twain, 5 Seconds of Summer, and more.

Matthew has been in a relationship with Hilary Duff since 2017. They welcomed a child together 2018. In December 2019, Hilary and Matthew married in a private ceremony at their shared Beverly Hills mansion.