After David Peter Cradick's (aka Kidd Kraddick) unexpected death from heart disease outside of New Orleans on July 27, 2013, the show became an ensemble program and resumed live broadcasts on August 5, 2013. As of January 15, 2014 the show's title was altered to The Kidd Kraddick Morning Show. After multiple runs at trying to get work as an actress early in her career, Rasberry finally landed an agent in Atlanta, Georgia and in 1990 took an advance on her Mastercard and moved there. After yet another failed attempt to become an actress, she hightailed it back home where she landed a hosting position for the morning show on Sunny 102.9 radio station. She later moved to Dallas to work on 106.1 KISS FM (1994). She also continued to go on auditions and even landed a small part in a made-for-TV movie called Holiday in Your Heart (1997) (TV) starring LeAnn Rimes. She's since done some voiceover work for radio commercials and co-hosted the webcast of the Blockbuster Entertainment Awards. She won a spot on "Women of Radio" week on "Live with Regis" and got to co-host a show with Regis Philbin. Kellie Rasberry is still associated with DISH Nation show, where the cast continues to honor their friend and colleague Kidd Kraddick, often pondering "What would Kidd do?" 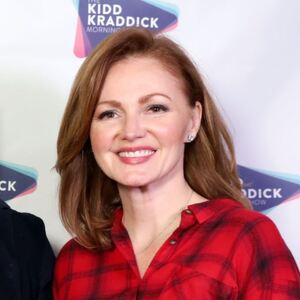