How much is Joe Hahn Worth?

Joe Hahn net worth: Joe Hahn is an American musician, director, and DJ who has a net worth of $25 million. Joe Hahn was born in Dallas, Texas in March 1977. He is best known for being the DJ for the rock band Linkin Park. The band formed in 1996 and released their debut studio album Hybrid Theory in 2000 which reached #2 on the Billboard 200 chart and the Top 5 in several countries, selling more than 11 million copies in the US. Their albums Meteora in 2003, Minutes to Midnight in 2007, A Thousand Suns in 2010, and Living Things in 2012 all reached #1 in the US as well as in several other countries. The band also had much success with their 2014 album The Hunting Party which reached the Top 3 in many countries including the US. Linkin Park's popular singles include "One Step Closer", "Crawling", "In the End", "Somewhere I Belong", "Faint", "Numb", "Breaking the Habit", "What I've Done", "New Divide", and many more. Hahn has directed music videos for Linkin Park and several other artists. In 2000 he won an Emmy for Special Make-up Effects for Dune from the Academy of Television Arts and Sciences College Television Awards. 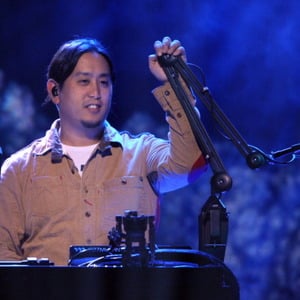