Goldie net worth: Goldie is an English musician, DJ, visual artist, and actor who has a net worth of $8 million. Goldie was born in Walsall, England, United Kingdom in September 1965. He started out as a graffiti artist and worked in musical genres such as jungle and breakbeat. Goldie used the name Rufige Kru and co-founded the record label Metalheadz. Goldie released his debut studio album Timeless in 1995 which was certified Gold and reached #7 in the UK. He released the album Saturnz Return in 1998 and Ring of Saturn in 1999. He released the albums Malice in Wonderland in 2007 and Memoirs of an Afterlife in 2009 as Rufige Kru and also released the album Sine Tempus – The Soundtrack in 2008. As an actor he has starred in the movies Everybody Loves Sunshine, The World Is Not Enough, and Snatch. Goldie has also competed on the reality TV series Celebrity Big Brother 2, Strictly Come Dancing, Maestro, and Come Dine with Me. 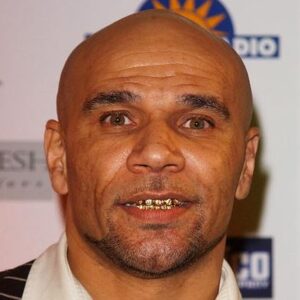