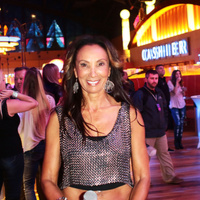 Downtown Julie Brown Net Worth: Downtown Julie Brown is a London-based actress and former MTV VJ who has a net worth of $5 million. Julie Dorne Brown (aka Downtown Julie Brown) was born August 27, 1959 in Bedfordshire, England. After winning the UK Disco Dancing Championships she went on to win the World Disco Dancing Championship in 1979. Soon after, Brown began a career on British television as a presenter and guest on a number of children's programs, including the long-running entertainment show Crackerjack. She also appeared as a dancer on Top of the Pops in the early 1980s as a member of the dance troop "Zoo"; she was very prominent on the Christmas Day 1981 show, in particular. After leaving MTV, Brown went on to work for ESPN conducting on- and off-field interviews with football athletes. She then moved to Los Angeles to host the E Entertainment channel's gossip show. Julie Brown became the host of the syndicated radio program American Dance Traxx in March 1992 until its final broadcast in December 1993. Brown has appeared in a number of movies and TV shows including Spy Hard; Spring Break '83; The Weird Al Show; B*A*P*S; Ride; Walker, Texas Ranger; Battle Dome; Hey Arnold!; I'm a Celebrity, Get Me Out of Here!; The Dog Whisperer; RuPaul's Drag U. Most recently, she appeared in television's Wife Swap in July 2013. She also appeared on the cover, and posed nude, for the August 1998 edition of Playboy. Brown currently hosts "The Back in The Day Replay Countdown" radio show on the SiriusXM station '90s on 9, where the 30 biggest songs of the week from a particular year in the '90s are counted down.