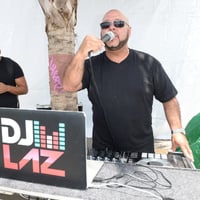 DJ Laz net worth and salary: DJ Laz is a Cuban-American rapper and DJ who has a net worth of $2 million. He hosted the weekday radio show, DJ Laz Morning Show in Miami on WPOW 96.5 for 22 years until he left the company in 2012. Later that year, the new DJ Laz Morning Show began on a newly reformatted WRMA DJ106.7, a Bilingual Dance/Rhythmic station, and also started airing on LA 96.3 in Los Angeles. In addition to his work on the radio, he is also known for his albums DJ Laz and Category 6, as well as the singles "Journey Into Bass" and "Move Shake Drop," which peaked at #56 on the Billboard Top 100 charts. He was born Lazaro Mendez on December 2, 1971 in Hollywood Florida and was raised in Miami. The DJ Laz Morning Show is known for mysteriously getting their hands on exclusive content and is also quite popular on the Fox Television show, Dish Nation. In May of 2014, DJ Laz took his 40-foot powerboat out for a day of partying to promote Voli Vodka off the shores of Key Biscayne. The boat became stranded on a sandbar and in an attempt to free the boat, Ernesto Hernandez, a 23-year old, was killed after being caught in the propeller; DJ Laz was behind the wheel of the boat at the time of the accident.