Clean Bandit released their debut studio album New Eyes on Atlantic records in 2014. The album reached #3 in the UK, #8 in Switzerland, and #9 in Ireland. It also charted in Austria, Belgium, France, Germany, the Netherlands, New Zealand, and the United States. Clean Bandit released the EPs 2010 in 2010, OriginL ClassC in 2011, and Live from France in 2012. Their single "Rather Be" (featuring Jess Glynne) reached #1 in the UK, Germany, and Ireland and #2 in six other countries. Their single "Rockabye" reached #7 in seven countries. The group won a Grammy Award for Best Dance Recording in 2015 for "Rather Be". 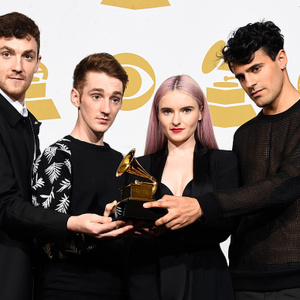