Zach Galifianakis Net Worth and Salary: Zach Galifianakis is an American stand-up comedian and actor who has a net worth of $40 million dollars. He is best known for his starring roles in comedy films like "The Hangover" trilogy, and for hosting his own Emmy Award-winning Funny or Die talk show, "Between Two Ferns with Zach Galifianakis".

Early Life and Career Beginnings: Zachary Knight Galifianakis was born on October 1, 1969, in Wilkesboro, North Carolina, to Mary Frances and Harry Galifianakis. His mother worked as a community arts center owner, and his father was a heating oil vendor. On his father's side, Galifianakis's family is from Crete, Greece, and on his mother's side he has Scottish ancestry. He has two siblings, a younger sister, Merritt, and older brother, Greg. After graduating from Wilkes Central High School, he continued his education at North Carolina State University, majoring in communications.

Galifianakis first began his career and entered the world of entertainment through television. He guest starred in the NBC sitcom "Boston Common" and had a two-week stint as a writer with "Saturday Night Live".

Career: In September 2001, Galifianakis appeared on an episode of "Comedy Central Presents". His segment included him performing a stand-up comedy routine, and him playing the piano, among others. The popularity of his segment helped him land his own VH1 talk show in 2002, "Late World with Zach". He also appeared in the Fox drama "Tru Calling" as the character of Davis, as Frisbee in four episodes of "Reno 911!", and multiple appearances on "Jimmy Kimmel Live!".

In 2006, Galifianakis starred in the Comedy Central show "Dog Bites Man" alongside A.D. Miles, Andrea Savage, and Matt Walsh. The show parodied local news coverage, with the stars traveling around performing in traditional scripted skits, as well as improvising some segments where they would interview unsuspecting people that thought they were being interviewed by a real news crew. He continued to appear in various shows on television, such as "The Sarah Silverman Program", "Tom Goes to the Mayor", and "Tim and Eric Awesome Show, Great Job!". He also appeared in the films "Into the Wild" (2007) and "Super High Me" (2007), and starred in the independent film "Visioneers" (2008). In 2006 he appeared in Fiona Apple's music video for "Not About Love", and in Kanye West's 2007 music video "Can't Tell Me Nothing". Additionally, his 2006 stand-up special "Zach Galifianakis Live at the Purple Onion" is one of the first original programs released by Netflix.

Together with Patton Oswalt, Brian Posehn, and Maria Bamford, Galifianakis was a member of the Comedians of Comedy. They were a comedy group tour styled based on the likes of groups like The Original Kings of Comedy and the Blue Collar Comedy Tour. Together, they toured around the country, performing at live rock clubs instead of traditional comedy clubs so they could reach a different audience.

Beginning in 2008, Galifianakis started hosting his own web series on Funny or Die called "Between Two Ferns with Zach Galifianakis". The format of the show follows him interview popular celebrities while they are seated between two potted ferns, and often his interview style is awkward, inappropriate, bizarre, and/or uncomfortable. He has interviewed notable and well-known figures like Jimmy Kimmel, Michael Cera, Jon Hamm, Natalie Portman, Bradley Cooper, Conan O'Brien, Ben Stiller, Steve Carell, Bruce Willis, Jennifer Aniston, Justin Bieber, Samuel L. Jackson, Will Ferrell, Hillary Clinton, and Former President Barack Obama. In addition to being the host, Galifianakis is also one of the show's producers. As a producer, he won the Primetime Emmy Award for Outstanding Short-Format Live-Action Entertainment Program at the 66th Primetime Creative Arts Emmy Awards. The show also spawned a Comedy Central television special, as well as the Netflix movie "Between Two Ferns: The Movie".

Hangover Salary: Believe it or not, Zach and the other Hangover actors were not the studios' first choices of star talent. Director Todd Phillips insisted they be hired and covered their salaries which amounted to less than $1 million total. The studio had such low expectations for the movie that it didn't think to sign the actors to sequel contracts. When the movie became a smash hit, the stars were able to score $5 million apiece for #2, and $10 million apiece for #3.

Personal Life: Galifianakis married Quinn Lundberg in August 2012. Lundberg is the co-founder of the charity Growing Voices. Together they have two sons, born in 2013 and 2016 respectively. He owns a farm in Sparta, Alleghany County, North Carolina. He splits his time between work and the farm.

In response to the passage of Texas H.B. 2, a state bill that placed restrictions on access to abortion that resulted in a large number of Texas abortion clinics to close, in January 2014 Galifianakis and his "A Night of a Thousand Vaginas" co-star Sarah Silverman set up a fundraiser to benefit the Texas Abortion Fund. 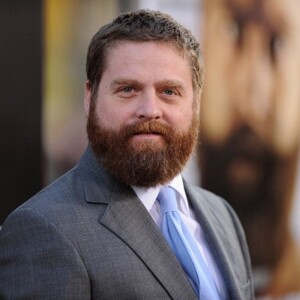