W. Kamau Bell net worth: W. Kamau Bell is an American stand up comedian and television host who has a net worth of $4 million. He has hosted several programs including United Shades of America.
W. Kamau Bell was born in Palo Alto, California in January 1973. He hosts the live radio show and podcast Kamau Right Now for WALW.

Bell is also the co-host of the podcasts Denzel Washington Is The Greatest Actor of All Time Period and Politically Re-Active. W. Kamau Bell began hosting the CNN television series United Shades of America in 2016. From 2012 to 2013 he hosted the FXX TV series Totally Biased with W. Kamau Bell. He has released the albums One Night Only in 2007, Face Full of Flour in 2010, and Semi-Prominent Negro in 2016. W. Kamau Bell won Primetime Emmy Award for Outstanding Unstructured Reality Program for United Shades of America in 2017, 2018, and 2019. 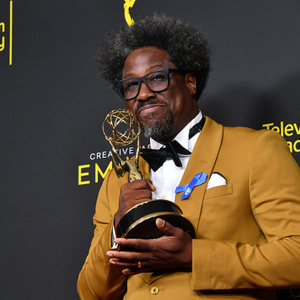