How much is Vic Reeves Worth?

Vic Reeves net worth: Vic Reeves is an English comedian, actor, and writer who has a net worth of $8 million. Vic Reeves was born in Leeds, England in January 1959. He is best known for being one half of the double act Vic and Bob with Bob Mortimer. Reeves and Mortimer have been named one of the 50 funniest acts in British comedy by The Observer and were named the 9th greatest comedy act ever in the Comedians' Comedian poll of 2005. As an actor he has starred in the TV series Vic Reeves Big Night Out, The Smell of Reeves and Mortimer, Bang, Bang, It's Reeves and Mortimer, Randall & Hopkirk (Deceased), Catterick, Monkey Trousers, Tittybangbang, Vic & Bob's Afternoon Delights, The Ministry of Curious Stuff, Hebburn, and House of Fools. He has authored the books Vic Reeves' Vast Book of World Knowledge, Vic Reeves Me:Moir, and Sunboiled Unions. In 2002 he won a Broadcasting Press Guild Harvey Lee Award and in 2012 Reeves and Mortimer won a Writer's Guild of Great Britain Award from the British Comedy Awards. 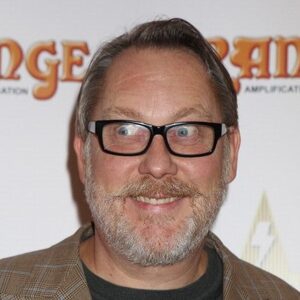