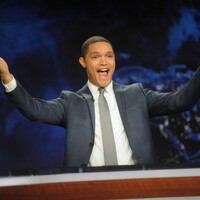 What is Trevor Noah's net worth and salary?

Trevor Noah is a South African comedian, actor, television host, and radio DJ who has a net worth of $100 million. After making a name for himself on the international stand-up comedy circuit, Trevor Noah made his big break in 2015 when he was announced as Jon Stewart's hand-picked replacement to host Comedy Central's "The Daily Show." In September 2022, after seven years of hosting duties, Trevor announced he was stepping down from The Daily Show.

In his first few years of hosting The Daily Show, Trevor's salary was $5-8 million, a relative pittance compared to Jon Stewart who had been earning $25+ million.

In September 2017 Trevor signed a lucrative contract extension with Viacom (owner of Comedy Central). This contract reportedly boosted his annual salary to $16 million.

Trevor Noah was born in Johannesburg, South Africa on February 20th, 1984. His father Robert being of Swiss extraction and his Patricia Nombuyiselo Noah being of Xhosa ancestry made life difficult for the Noah family under the South African apartheid rule of the time, which had criminalized interracial marriage by the time Trevor was born, and his mother faced jail time and fines over the course of his childhood (he wrote about his experiences growing up under apartheid in South Africa in his 2016 book "Born a Crime").

Trevor Noah's career in show business began when he was just a teenager. At 18, he had a walk-on part on an episode of the popular South African soap opera "Isidingo" in 2002. Around the same time, he began hosting his own youth-oriented radio show entitled "Noah's Ark;" after that, he hosted an educational TV series called "Run The Adventure from 2004 to 2006. Then, in 2007 Noah hosted the gossip TV series "The Real Goboza" and co-hosted the dating game show "The Amazing Date" the year after that. He didn't just work as a TV host at this point in his career; around this time he also appeared as a contestant on the fourth season of the reality TV series "Strictly Come Dancing." He hosted the South Africa Film and Television Awards in 2009, co-hosted the South African Music Awards in 2009 and 2010, and eventually got his own TV show entitled "Tonight with Trevor Noah." He then started getting endorsement deals, such as when he became a spokesperson and consumer protection agent for South African cellular provider Cell C in 2010. Throughout his career he's continued to distinguish himself on the stand-up stage, performing with comedians like Paul Rodriguez, Gabriel Iglesias, and Russell Peters.

In 2012, his comedy career reached a new milestone when Noah was the first South African stand-up comedian ever to perform on "The Tonight Show," going on to hold the same distinction on "The Late Show with David Letterman" the following year.  He was the subject of the documentary "You Laugh But It's True" in 2012, and then at the end of 2014 he made his first appearance as a contributor for "The Daily Show with Jon Stewart." That same year, he received a nomination for an MTV Africa Music Award for Personality of the Year.

On March 30, 2015, it was announced that Trevor Noah had been chosen to replace Jon Stewart as the host of "The Daily Show." Since taking over, he's won multiple awards for his work on the show and in 2017 was nominated for a Primetime Emmy Award.

Trevor Noah has also found work as a TV producer, developing both "The Opposition with Jordan Klepper" and "Klepper" with former fellow "Daily Show" correspondent Jordan Klepper on Comedy Central, and executive produced yet another show from another "Daily Show" correspondent Roy Wood, Jr. called "Jefferson County: Probation." As befitting his position as a major late-night talk show host, he's also begun racking up cameo appearances on film and TV, making an appearance on the series "Nashville: in 2017, as well as in "Black Panther" and "American Vandal" the following year. 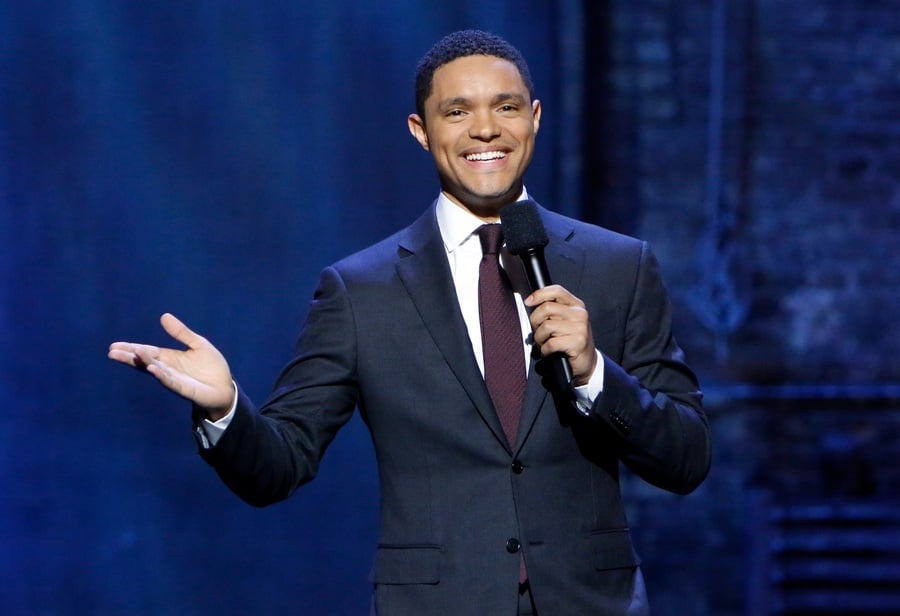 Noah is the author of the aforementioned memoir "Born a Crime," which is slated to be produced as a feature film starring Lupita Nyong'o. In 2018, Noah, along with the writing staff of "The Daily Show," released "The Donald J. Trump Presidential Twitter Library," a book based on a South by Southwest installation that in turn was based on President Donald Trump's Twitter account.

In 2018, Trevor Noah established The Trevor Noah Foundation in his native Johannesburg. According to the foundation's official site, its main goal is to provide youth in South Africa with "the tools, skills, and pathways to opportunity required to improve their lives and catalyze change in their communities."

Trevor Noah is probably the only major American talk show host who can speak a total of eight languages: English, Xhosa, Zulu, Sotho, Tswana, Tsonga, Afrikaans, and German. He originally made the journey from South Africa to America under extremely unpleasant circumstances: his mother was shot in the head by her ex-husband Ngisaveni Abel Shingange, who Noah says threatened him after he called him on the phone to confront him about what he'd done. In 2011 Shingange was convicted of attempted murder for the shooting since Noah's mother miraculously survived. He has said that he hoped the incident would direct the public's attention to the issue of domestic violence – and the law enforcement response (or lack thereof) to it – in South Africa: "For years my mother reached out to police for help with domestic abuse, and nothing was ever done. This is the norm in South Africa. Dockets went missing and cases never went to court."

In January of 2019, Trevor Noah made headlines for his purchase of a mansion in the Bel-Air neighborhood of Los Angeles. Noah paid a reported $20 million for the mansion, which spreads across 10,044 square feet and two stories, with five bedrooms and eight bathrooms. The mansion has an expansive main bedroom suite that measures in at 2,200 square feet all on its own, and the property sports an infinity-edge swimming pool, a private home movie theater, and a 500-gallon saltwater aquarium. For any extra special guests that might come through to see Noah in Bel-Air, there's an "ultra-private VIP suite" that has, among other things, its own private entrance.

Not quite two years after paying $20.5 million for the above home, in September 2020 Trevor offloaded it for $21.5 million.

In 2017 Trevor paid $10.1 million for a duplex in Manhattan. This was his primary residence while he was taping The Daily Show. In October 2022 Trevor listed this property for sale for $12.95 million. The 3,600 square foot apartment features a private terrace with a plunge pool and a screening room.

In January 2021 Trevor paid $27.5 million for a home in Bel-Air. In October 2021, just 10 months later, he listed this home for sale for $30 million. In March of 2022 Trevor sold the home to Bird scooter founder Travis Vanderzanden. Here's a video tour of this house:

Trevor also reportedly owns several properties in his native South Africa, including an apartment in Cape Town and a house in the suburbs of Johannesburg.