The Fat Jewish Net Worth

What is The Fat Jewish's Net Worth?

The Fat Jewish is an American Instagram celebrity, writer, actor, model, and entrepreneur who has a net worth of $80 million. Also known as Josh Ostrovsky, he rose to fame thanks to the Instagram account "TheFatJewish." He started his Instagram account in 2009 and went viral in 2013. He has more than 10 million followers and was named one of The 30 Most Influential People on the Internet by Time magazine in 2014. The Fat Jewish authored the book Money Pizza Respect in 2015 and appeared in films including "Ben Banks," "Zoolander 2," "Status Update," and "The American Meme." He has also appeared in music videos for The Chainsmokers, Dillon Francis, DNCE, and Charli XCX.

Alcohol Empire And Sale to Annheuser-Busch

The Fat Jewish is a co-founder of a company called Swish Beverages which, in 2015, launched a wine label called White Girl Rosé. He has since released a series of alcohol brands. In 2018, Annheuser-Busch InBev acquired a minority stake in the company. In June 2019, Annheuser-Busch InBev acquired the entire business. At the time of the sale, an estimated 95% of Swish Beverage profits were generated by White Girl Rosé. The brand sold for a reported $150 – $200 million. Josh was the majority owner out of three co-founders. Between the two sales, Ostrovsky earned an estimated pre-tax $120 million.

Ostrovsky was born on February 18, 1982 in New York City. His father is Russian-born radiologist, Paul Ostrovsky, and his mother is a nutritionist named Rebecca. He grew up in Manhattan on the Upper West Side. Throughout his early years, he attended a number of schools, starting at the Packer School in Brooklyn and then attending Trevor Day School and the Dwight School in the Upper West Side. He attempted to become an actor early on and appeared in a number of commercials, including one for Hershey's.

After attending New York University and Skidmore College, he was expelled from both. He then enrolled at State University in New York at Albany. He graduated in 2006 with a Bachelor of Arts degree in journalism. While there, he joined a rap trip called Team Facelift where he first started going by the name Fat Jew. The group formed in 2004 and signed with Duck Down Records before releasing an album in 2006 called "Mixed Emotions." They then broke up in 2010.

In 2009, Ostrovsky was hired as an entertainment reporter who interviewed celebrities on "The Daily 10" on the E! Network. He then began hosting a rap interview web series called "An Intimate Conversation." He also successfully sold a show to Amazon in 2013 that was meant to parody the Williamsburg, Brooklyn hipster culture, though the show ultimately went unproduced.

Meanwhile, Ostrovsky had started an Instagram account under the handle "The Fat Jewish" in 2011. The account went viral in 2013 after he posted a video parodying the popular exercise spin class "SoulCycle." Later that year, his account was suspended due to inappropriate content. In response, he organized a rally outside of Instagram's New York office that was live-streamed on Vice.com. The rally was successful, as his account was restored after only 15 minutes. His account following continued to grow and several major media publications published profiles on him, including "The New York Times" and "Time" magazine. He was named to Time's 2015 list of "The 30 Most Influential People on the Internet." The same year, he was also involved in a slight controversy when he was accused of posting screenshots of other comedians' jokes on his account with properly crediting them. He later edited his posts to give proper credit. As of 2021, his account still had over 10 million followers. 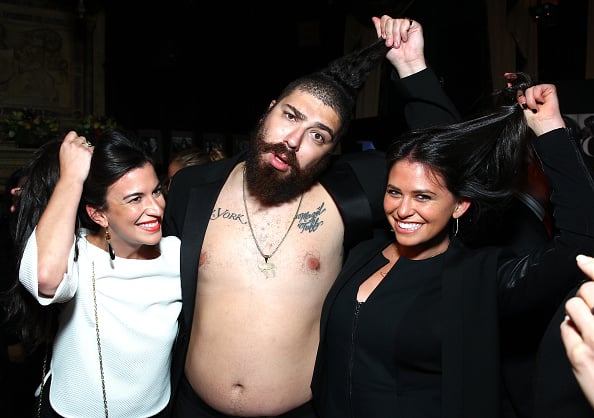 Ostrovsky has channeled his success on social media into creating greater opportunities elsewhere in the world of entertainment. In June of 2012, he signed a modeling contract with One Management and claims to be the world's first male plus-sized model. He appeared in a photo spread in "Inked" magazine in May of 2015 and also had his own show at New York Fashion Week the same year, where he debuted his collection of men's apparel under the label Dad Fashion Show.

In 2014, he signed a deal with Comedy Central to develop a scripted series based on his life. He also began making regular appearances on Bloomberg News in 2015 and starred in a Bud Light commercial that aired during Super Bowl XLIX. The same year, he appeared in music videos for DNCE and Charli XCX. His acting career also grew, as he appeared in a number of reality shows like "The Real Housewives of Beverly Hills" and a number of films. Some of the films in which he has appeared include "Status Update" and the documentary "The American Meme." Additionally, he has signed deals with brands like Virgin Mobile, Burger King, Budweiser, Weight Watchers, and Stella Artois to do product placement in his Instagram posts. In 2015, he also signed to be a spokesperson for the brand Seamless.

Another venture he has pursued has been the creation of his own beverage company. He is a co-founder of Swish Beverages which launched the wine, White Girl Rose, in 2015. The brand then followed up the launch with the release of the Babe family of sparkling canned wines. In June of 2019, Swish Beverages was acquired by Anheuser-Busch InBev, making it the largest wine investment to date by the beer brand.

Ostrovsky married his first wife, blogger Katie Sturino, in 2014. The couple announced they would be getting divorced in 2016. He then married Caitlin King. The two had a son together named Buddy in February of 2021. Ostrovsky has also been involved in a number of other weddings as officiant, as he is an ordained minister. He also published his own book of essays and personal stories in 2015 called "Money Pizza Respect." The book title is based off of a radio show he formerly hosted on Apple Music. 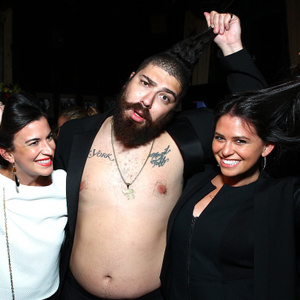