What is Steve Martin's Net Worth and Salary?

Steve Martin is an American comedian, actor, writer, and musician who has a net worth of $140 million. Martin first gained attention as a writer and performer on "The Smothers Brothers Comedy Hour" (1968-1969) and was a frequent guest on "The Tonight Show Starring Johnny Carson," appearing 56 times between 1972 and 1992. Steve has starred in dozens of movies, including "The Jerk" (1979), "Three Amigos" (1986), "Dirty Rotten Scoundrels" (1988), and "Parenthood" (1989). Steve is an accomplished author, playwright, screenwriter, and banjo player and has won several awards for his work. Martin has hosted "Saturday Night Live" 15 times, and a compilation of his greatest moments, "SNL: The Best of Steve Martin" was released on DVD in 2000.

Early Life: Steve Martin was born Stephen Glenn Martin on August 14, 1945, in Waco, Texas. He grew up with mother Mary, father Glenn (a real estate salesman), and sister Melinda in Inglewood and Garden Grove, California. Steve attended Garden Grove High School, where he was on the cheerleading squad, and he had a job selling guidebooks at Disneyland from 1955 to 1958. He enjoyed spending time at Disneyland's Main Street Magic shop and began working at Fantasyland's magic shop in 1960. At the age of 18, Martin began performing music, magic, and comedy at Knott's Berry Farm. After graduating from high school, he took drama and poetry courses at Santa Ana College before transferring to UCLA to study theater in 1967. While attending college, Steve performed at local clubs, and he dropped out of UCLA when he was 21.

Stand-Up Comedy Career: In 1967, Nina Goldblatt, Martin's former girlfriend, submitted his work to Mason Williams, the head writer of "The Smothers Brothers Comedy Hour." Williams hired Steve to be a writer, and the writing staff won an Emmy for Outstanding Writing Achievement in Comedy, Variety or Music in 1969. Martin also made his first TV appearance on the show (1968) and went on to write and perform for "The Sonny and Cher Comedy Hour" from 1971 to 1973. Beginning in the mid-1970s, he frequently appeared on "The Tonight Show Starring Johnny Carson," "The Gong Show," "The Muppet Show, " and "Saturday Night Live," and his stand-up comedy albums, "Let's Get Small" (1977) and "A Wild and Crazy Guy" (1978) went platinum and earned Steve 2 Grammys. "A Wild and Crazy Guy" included the song "King Tut," which hit #17 on the "Billboard" Hot 100 chart and has sold more than a million copies. He also released "Comedy Isn't Pretty" in 1979 and "The Steve Martin Brothers" in 1981.

Acting Career: In 1977, Martin starred in "The Absent-Minded Waiter" (which he also wrote), and it earned him an Academy Award nomination for Best Short Film, Live Action. He then starred in 1979's "The Jerk" (which he co-wrote with Carl Gottlieb and Michael Elias); the film grossed $100 million worldwide and is considered to be one of the funniest movies of all time. In the 1980s, Steve starred in future classics like "Three Amigos," "Planes, Trains, & Automobiles," "Dirty Rotten Scoundrels," and "Parenthood," and he appeared in 17 films in the 1990s, including the "Father of the Bride" movies, "Leap of Faith," and "Bowfinger." Though Martin has been focusing on music more than acting in the 2000s, he did film "Bringing Down the House," "Shopgirl," "Baby Mama," and "It's Complicated" as well as the "Pink Panther" and "Cheaper by the Dozen" movies. 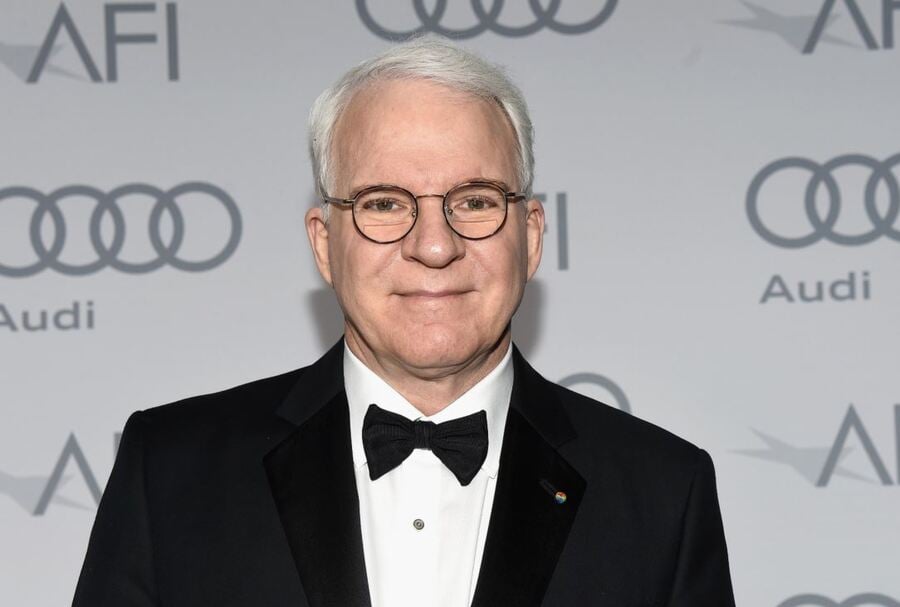 Writing Career: Martin has published 12 books, including "Picasso at the Lapin Agile and Other Plays" (1996), "Pure Drivel" (1998), "Shopgirl" (2000), and "Born Standing Up: A Comic's Life" (2007). He also wrote the screenplays for "The Jerk," "Three Amigos," "Roxanne," "Bowfinger," and several other films. Steve wrote the script and music (along with Edie Brickell) for "Bright Star," which ran on Broadway from February to June 2016 and embarked on a national tour the following year; the play won a Drama Desk Award and 2 Outer Critics Circle Awards. His play "Meteor Shower" made it to Broadway in November 2017 and starred Amy Schumer, Keegan-Michael Key, and Laura Benanti.

Music Career: Steve began playing banjo at age 17 and has frequently included it in his stand-up comedy act. He contributed to Earl Scruggs' "Foggy Mountain Breakdown" in 2001, winning a Grammy for Best Country Instrumental Performance. Martin released the album "The Crow: New Songs for the 5-String Banjo" in 2009 and won a Grammy for Best Bluegrass Album. He began touring with bluegrass band Steep Canyon Rangers in September 2009 and recorded the album "Rare Bird Alert" (2011) with them. Steve then collaborated with Edie Brickell on the 2013 album "Love Has Come for You," and the title track won him his fifth Grammy (Best American Roots Song). Martin and Brickell collaborated again on 2015's "So Familiar" and the musical "Bright Star."

Personal Life: Steve began a relationship with Bernadette Peters in 1977, and they stayed together for 4 years; Martin wrote the character of Marie in "The Jerk" with Peters in mind, and the pair also starred in "Pennies from Heaven" together. Steve was married to actress Victoria Tennant from 1986 to 1994, then went on to wed writer Anne Stringfield in 2007. Steve and Anne welcomed a daughter in December 2012, making him a first-time dad at the age of 67.

Martin started collecting art in the late 1960s, and 28 items from his art collection were displayed as part of an exhibit at the Bellagio Gallery of Fine Art in 2001. In 2006, Sotheby's paid $26.8 million for one of the paintings from his collection, Edward Hopper's "Hotel Window."

Awards and Honors: Steve has won several awards for his work, including 5 Grammys, 2 People's Choice Awards, 2 Writers Guild of America awards, an Emmy (1969), a Mark Twain Prize for American Humor (2005), and a Kennedy Center Honor (2007). He received an honorary Academy Award in 2004 as well as lifetime achievement awards from the American Comedy Awards (2000), American Film Institute (2015), and the Las Vegas Film Critics Society (2010). Martin was ranked #6 on Comedy Central's 2004 list of the 100 greatest stand-up comics, and in 2011, the International Bluegrass Music Association named him Entertainer of the Year. 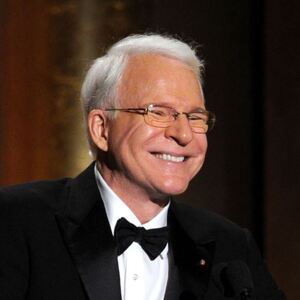