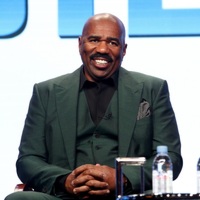 What is Steve Harvey's Net Worth and Salary?

Steve Harvey is an American comedian, businessman, Award-winning show host and entertainer who has a net worth of $200 million. Steve Harvey first became nationally-famous as a standup comedian in the 1980s. Between 1996 and 2002 he starred on "The Steve Harvey" show, a sitcom on the WB network which ran 122 episodes over six seasons. Steve was also a producer on the show. Today Steve is known for hosting the nationally-syndicated radio show, "The Steve Harvey Morning Show", as well as popular game shows "Family Feud" and "Celebrity Family Feud". Out of the roughly $40 million Steve earns every year, $10 million comes from "Family Feud" and $20 million comes from his radio hosting salary.

Broderick Stephen Harvey was born on January 17, 1957 in Welch, West Virginia. His family later moved to Cleveland, Ohio, where he graduated from Glenville High School in 1974. He attended Kent State University and later West Virginia University. He has held jobs ranging from boxer, autoworker and insurance salesman to carpet cleaner and mailman, and first ventured into comedy on October 8, 1985 when he performed at the Hilarities Comedy Club in Cleveland, Ohio. No stranger to hardship, during his early career Harvey was homeless for three years in the late 1980s, during which he slept in his 1976 Ford when the gigs he performed at did not provide a hotel.

As a finalist in the Second Annual Johnnie Walker National Comedy Search in 1990, Harvey landed a spot as the host of TV show "It's Showtime at the Apollo". He continued to perform stand-up comedy, going on the 1997 Kings of Comedy tour with Cedric the Entertainer, D.L. Hughley, and Bernie Mac. This tour is one of the highest-earning comedy tours of all time, grossing $37 million in 1997 and 1998. From his success and recognition as a comic he landed opportunities such as a starring role on the ABC show "Me and the Boys" (1994); his own show on the WB network, "The Steve Harvey Show" (1996-2002); "The Steve Harvey Morning Show", a weekday radio program he has hosted since 2000; and roles in films such as "The Fighting Temptations" (2003) and "Love Don't Cost a Thing (2003). In 2006, he released the stand-up special "Steven Harvey: Don't Trip… He Ain't Through with Me Yet". 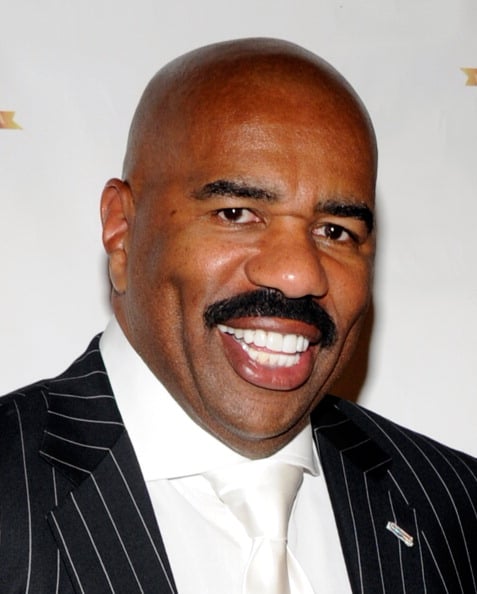 On August 2, 2012, Harvey performed his final stand-up show at the MGM Grand in Las Vegas, ending his 27-year career as a stand-up comedian. However, in addition to his comedy career, Harvey has enjoyed many successes in his various other projects.

Perhaps even more so than as a comedian, Harvey is famous as a dynamic and engaging host. In 2010, Harvey began hosting the game show "Family Feud". His consecutive tenure as host is also the longest of any previous hosts of the show. A spin-off, "Celebrity Family Feud", is also hosted by Harvey. He has achieved modern notoriety thanks to YouTube, and the many viral videos showing his reactions to "Family Feud" participants and their inappropriate or incorrect answers. He was nominated for both the Outstanding Talk Show Host and Outstanding Game Show Host Daytime Emmy Awards in 2013, the first double-nominated host ever. The same year, he received a star on the Hollywood Walk of Fame.

In 2015, Harvey hosted the Miss Universe 2015 pageant in Las Vegas. Despite his mistake, where he named the first-runner up as the winner and had to announced a few minutes after she was crowned that he had read the results incorrectly, he has continued on to host the Miss Universe pageant in 2016, 2017, and 2018. 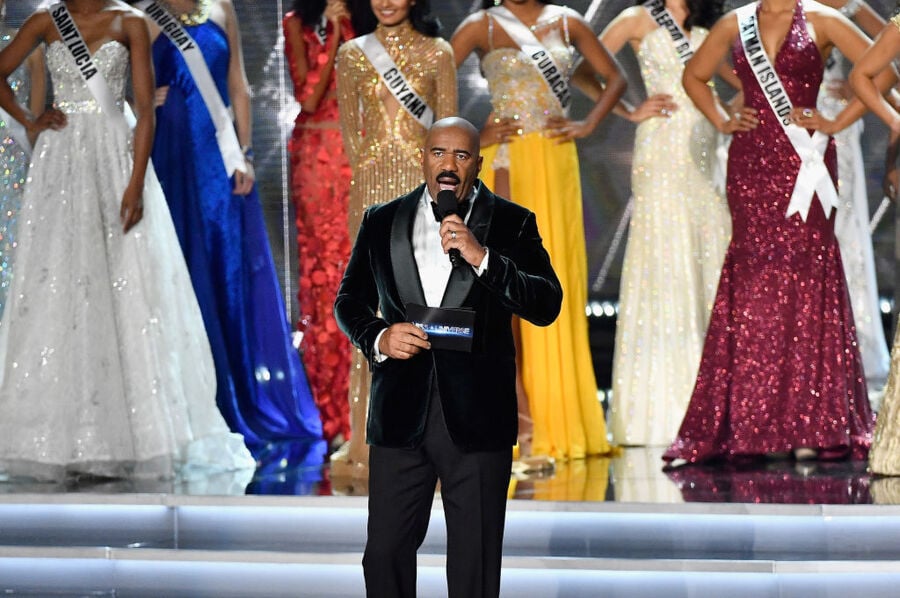 How Much does Steve Harvey earn from Family Feud?

Some other ventures Harvey has been involved in include the release of the book "Act Like a Lady, Think Like a Man" in 2009, which inspired the 2012 ensemble film "Think Like a Man". The hardcover version of the book spent 64 weeks on the New York Times bestseller list. He has also published the books "Straight Talk, No Chaser" (2010), "Act Like A Success" (2014), and  "Jump: Take the Leap of Faith to Achieve Your Life of Abundance" (2016). Furthermore, in 2014 he launched the dating site Delightful, in a joint venture with IAC. Together with Ellen DeGeneres, Harvey co-created the show "Little Big Shots" in 2016, which he also hosted until 2019.

In 2017 Harvey united all of his business ventures under Steven Harvey Global (SHG). Under SHG is his production company East One Twelve, as well as the company Harvey Events, led by his daughter Morgan and her husband. SHG also owns the rights to international versions of "Family Feud", announcing an African version of the show for 2020. He has continued with his various business projects under SHG, including the launch of the Sand and Soul Festival in 2017, a yearly event featuring live music, comedy, and a Q&A session with Harvey himself. 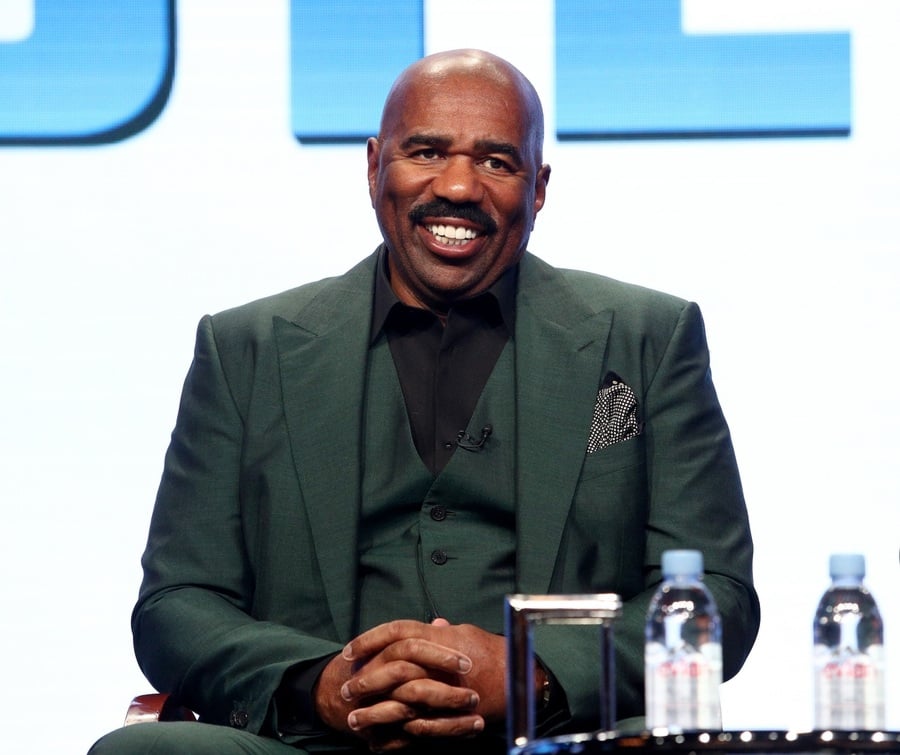 Harvey has been married three times. His current wife is Marjorie Bridges, whom he married in 2007. He has a total of 7 children; three from his first marriage, one from his second marriage, and Marjorie's three children he adopted when the couple married. Together with Marjorie, he founded The Steve and Marjorie Harvey Foundation, which focuses on youth outreach and education.

In February 2018, Steve and Marjorie leased a large mansion in the gated community of Beverly Park which sits atop Beverly Hills, California. The 12,000 square foot house, which sits on just under 2 acres, was at one time listed for lease at $125,000 PER MONTH but the Harveys managed to talk the owners down to $110,000 per month. That works out to around $1.3 million per year in rent. At one point in 2007 the house was listed for sale for $23.5 million.

Outside of Los Angeles, Steve Harvey owns a 9,000 square foot mansion in Atlanta which was purchased in 2010 for $3.4 million and an equally-large mansion outside of Dallas, Texas that sits on 4 acres. In 2013 Steve purchased a 5,500 square-foot house in Chicago on the 88th floor of Trump International. He sold that property in 2018 for $7.7 million.

In May 2020 Steve paid $15 million to acquire Tyler Perry's one-time mansion in Atlanta. The gated, 35,000 square-foot home sits on 17-acres. Tyler bought the house in 2017, poured millions into renovations and sold it in 2016 to an evangelist named David Turner for $17.5 million. Turner took a $2.5 million loss on the home.