Outside of his work with Gervais, Merchant has carved out his own unique identity in the entertainment world with a number of roles and credits. Over the course of his career, Stephen has won a number of awards, including two Golden Globe Awards, three BAFTA Awards, a Primetime Emmy Award, four British Comedy Awards, and many others.

Early Life: Stephen James Merchant was born on November 23rd of 1974 in Bristol, England. He was raised in the Hanham suburb of Bristol by his mother, a nurse, and his father, a plumber and construction worker. After graduating from secondary school, Stephen attended the University of Warwick for three years. During his university years, Merchant worked on the student radio station as a film reviewer. This was the beginning of his broadcasting career.

Merchant's role model was John Cleese, a well-known British comic famous for his roles in the Monty Python films. Like Merchant, Cleese is tall, lanky, and from the West Country of England. Eventually, Merchant began to get into stand-up comedy.

Career: Stephen Merchant's career began in earnest when he started doing stand-up at the Comedy Box – a comedy club in Bristol. Merchant admitted that while he started well, he quickly floundered and realized that stand-up comedy was much more difficult than he initially thought. During this early period, Merchant also appeared on the show "Blockbusters" and worked as a DJ for Radio Caroline.

A major moment in Stephen's career came when he first met Ricky Gervais. That moment came in 1997 when Gervais hired Stephen while working as the Head of Speech for XFM London. They worked together as co-hosts for a Saturday night radio show until their radio station was acquired by another company in 1998. Their radio show never had a huge audience, and Stephen began studying media production at the BBC after they both lost their jobs.

While studying production, Stephen Merchant created a 30-minute short film called "Seedy Boss," with Gervais playing the character that would later inspire his role in "The Office." Although Gervais and Merchant created a sitcom pilot called "Golden Years," it failed to take off. In 2001, the BBC took a risk on "The Office," and it aired for a first season with Merchant and Gervais acting as co-writers and co-directors. The series largely fell on deaf ears, and it received poor ratings. Both Merchant and Gervais returned to radio, hosting a new show together.

However, "The Office" was steadily becoming a cult hit behind the scenes. DVD sales skyrocketed, and soon it was obvious that there was a demand for a second season. After the BBC approved season 2, Merchant and Gervais quit their radio jobs and began work on the next installment of "The Office." The second season also saw Stephen appear on the show in a cameo role for the first time. Outside of "The Office," Merchant appeared in series such as "Garth Marenghi's Darkplace" and "Green Wing."

As "The Office" continued to draw in a wide audience, the show was given an American version in 2005. This proved to be a very profitable venture for Merchant and Gervais, and they were credited as executive producers. The pair later co-wrote one episode, and Merchant directed another episode during the fifth season. Also in 2005, Gervais and Merchant collaborated to create a weekly podcast called "The Ricky Gervais Show." It quickly became the most popular podcast in the world, shattering numerous records in the process.

To round out a busy 2005, Merchant took a supporting role in the sitcom "Extras" alongside Gervais once again. In 2007, Stephen began hosting his own radio show and explored new types of music. Throughout his entire career, he continued to perform stand-up comedy. In 2011 he toured the United Kingdom and the United States with an updated comedy routine. In 2012, he followed up with a tour of Australia and New Zealand. In 2014, he toured with his stand-up act once again across Scandinavia.

In 2013, Merchant started starring in his own sitcom called "Hello Ladies." For one of the first times ever, Gervais did not assist Merchant in this major project. Unfortunately, HBO never renewed the series for a second season – but a special movie adaption was released in 2014.

Outside of these projects, Merchant has appeared in films such as "Hot Fuzz," "Run Fatboy Run," "The Invention of Lying," and "Tooth Fairy." He also appeared to wider audiences with a non-speaking role in "24." Gervais and Merchant also had a hand in the creation of the film "Cemetery Junction." The duo also produced "An Idiot Abroad" together and landed cameo roles in "Life's Too Short. In 2013, Merchant starred in "I Give It a Year."

Merchant is also known for his voice-acting roles. In 2011, he voiced a character in the CGI film "Gnomeo & Juliet." That same year, he booked the role of Wheatley the robot in the video game "Portal 2." In addition, Stephen has provided voice-over work in commercials for Barclays and Waterstones. In 2017, Stephen landed one of his most notable roles in "Logan," playing a mutant named Caliban.

Real Estate: In 2014, it was reported that Stephen Merchant had purchased a property in Beverly Hills for $3.16 million. The property was previously owned by Ellen Degeneres and features almost 3,000 square feet of living space. Merchant also owns a second property in London, England.

Syndication Income: To date, Stephen and Ricky have earned north of $50 million from the American version of The Office – mostly through global syndication sales. 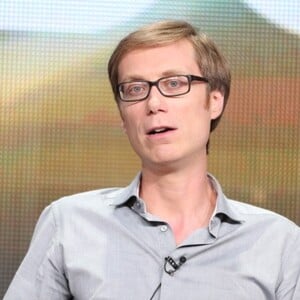