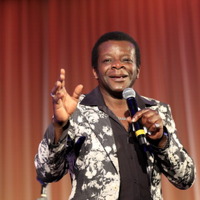 Stephen K. Amos net worth: Stephen K. Amos is an English stand-up comedian and television personality who has a net worth of $3 million. Stephen K. Amos was born in London, England, United Kingdom in December 1967. He is known for his live act that he performs across the world which involves audience members. Amos started out as an emcee at comedy clubs in South London. He has released the stand-up DVDs Find the Funny in 2009 and The Feel Good Factor in 2010. In 2011 he voiced the role of Hyena on the television series Tinga Tinga Tales. Stephen K. Amos has appeared on several TV series including Back in the Day, The Most Annoying Pop Songs… We Hate to Love, The Law of the Playground, Batteries Not Included, The One Show, Loose Women, Good News Week, The Xtra Factor, The Wright Stuff, Spicks and Specks, and more. He authored the book I Used To Say My Mother Was Shirley Bassey in 2012.