Stan Laurel net worth: Stan Laurel was an English comic actor, writer and director who had a net worth of $50 thousand. Stan Laurel was born in Ulverston, Lancashire, England in June 1890 and passed away in February 1965. He was best known for being one half of the comedy duo Laurel and Hardy with Oliver Hardy.

The duo starred in more than 100 feature films, shorts, and cameo roles. Laurel started out in the British music hall and perfected his skills at pantomime. He served as Charlie Chaplin's understudy as a member of Fred Karno's Army. Laurel's acting career lasted from 1917 to 1951 in silent films and talkies. He starred in the 1932 movie The Music Box. Stan Laurel received a Lifetime Achievement Academy Award in 1961 and has a star on the Hollywood Walk of Fame at 7021 Hollywood Blvd. A bronze statue of Laurel and Hardy was unveiled in his hometown in 2009. Laurel and Hardy's signature song has been known as "Ku-Ku", "The Cuckoo Song" or "The Dance of the Cuckoos" and played over their opening film credits. Stan Laurel passed away on February 23, 1965 at the age of 74 from a heart attack. Unfortunately, Oliver and Stan never really were able to benefit financially from their massive success. At the end of his life in the early 1960s, Stan Laurel was living in a cheap Santa Monica apartment out of necessity. The duo claims that much of their money went to producers and managers who technically owned their image. For Stan Laurel, he also lost much of his fortune in several divorces. 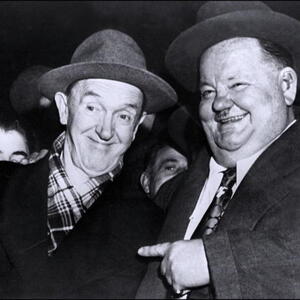