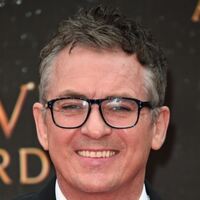 Shane Richie net worth: Shane Richie is a British actor, comedian, and singer who has a net worth of $20 million. He is best known for starring on the soap opera EastEnders.

Shane Richie was born in Kensington, London, England in March 1964. In 1991 he starred on the television series You Gotta Be Jokin'. Richie starred as Dr. Danny Dexter on the TV series Night & Day from 2002 to 2003. In 2009 he had a recurring role on the series Minder as Archie Daley. Shane Richie starred as Alfie Moon on the television series EastEnders from 2002 to 2019. He also starred as Alfie Moon on the TV series Redwater in 2017. Richie starred as Sammy Valentino on the series Benidorm from 2016 to 2018. He has appeared in films including Distant Shadow, Risen, The Reverend, and Prisoners of the Sun. Shane Richie released the albums The Album in 1997, Once Around the Sun in 2000, and A Country Soul in 2017. He was married to Coleen Nolan from 1990 to 1999 and has five children including Jake Roche.