Rodney Dangerfield Net Worth: Rodney Dangerfield was an American comedian and actor who had a net worth of $10 million at the time of his death in 2004 (adjusting for inflation). Rodney was best known for his mordant one-liners and Borscht Belt monologues. After getting his start performing stand-up in the Catskills, he rose in popularity as a go-to guest on late night talk shows over the course of the 1960s and 70s, and then as a headlining Las Vegas act. Along with his iconic catchphrase, "I don't get no respect!," Dangerfield is widely remembered for his starring role in the 1980 golf comedy "Caddyshack."

Early Life and Career Beginnings: Rodney Dangerfield was born as Jacob Rodney Cohen in 1921 in the Village of Babylon, on Long Island, New York. His mother was Dorothy Teitelbaum, who came from the Austro-Hungarian Empire, and Phillip Cohen, a vaudevillian performer; both were Jewish. Much strife came from the fact that Phillip was rarely home, and Dorothy seldom showed her son affection. When his father abandoned the family, Dangerfield moved with his sister and mother to Kew Gardens, Queens, where he attended Richmond Hill High School, graduating in 1939. Dangerfield began writing for stand-up comedians at the age of fifteen while performing at a resort in Ellenville, New York. After legally changing his name to Jack Roy, he struggled economically for almost a decade, taking odd jobs as a singing waiter and an aluminum-siding salesman.

Dangerfield's career rehabilitation took place in the early 1960s, after returning to the stage to perform at resorts in the Catskill Mountains. Still struggling to find success, he realized he needed to cultivate an artistic persona that would make him stand out in the world of comedy. He thus adopted the name Rodney Dangerfield, which had previously been used for a character on a Jack Benny radio program in the 1940s. Dangerfield was greatly inspired by this character, who had similarly received meager respect from society.

Comedy Triumphs: Dangerfield found a significant, career-defining break in 1967, when he was booked as a last-minute replacement on "The Ed Sullivan Show." He was an immediate hit with audiences, and subsequently started headlining shows on the Las Vegas casino circuit. Continuing to appear frequently on "The Ed Sullivan Show," he also became a regular guest on "The Dean Martin Show" and "The Tonight Show," ultimately appearing on the latter upwards of 70 times.

In 1969, Dangerfield partnered with longtime friend Anthony Bevacqua to establish Dangerfield's, a comedy club in New York City. The club served as a venue for numerous HBO comedy specials featuring comics such as Bob Saget, Jim Carrey, Jerry Seinfeld, Rita Rudner, and Sam Kinison. Later, major awards success came to Dangerfield when he won a Grammy for his 1980 comedy album "No Respect."

A Career on the Screen: While Dangerfield had already appeared in movies such as 1971's "The Projectionist," his acting career truly flourished in the 1980s, when he made a number of successful comedies. The most notable was "Caddyshack," in which he starred as an insufferable property developer who butts heads with a priggish judge. The role ended up being bigger than was initially planned, thanks to the prodigious improvisational skills of Dangerfield and his costars Bill Murray and Chevy Chase. Following this success, the comic landed starring roles in 1983's "Easy Money" and 1986's "Back to School," the former of which he also co-wrote. Later, after his involvement in an unsold TV pilot, he decided to buck his comedy persona by playing an abusive father in 1994's "Natural Born Killers." Other screen appearances by Dangerfield included parts on television's "The Simpsons" and "Home Improvement"; roles in family films such as "Casper: A Spirited Beginning" and "Rusty: A Dog's Tale"; and the part of Lucifer in the 2000 Adam Sandler comedy "Little Nicky." Comically, Dangerfield's last film role was playing God in 2005's "Angels with Angles," released posthumously. 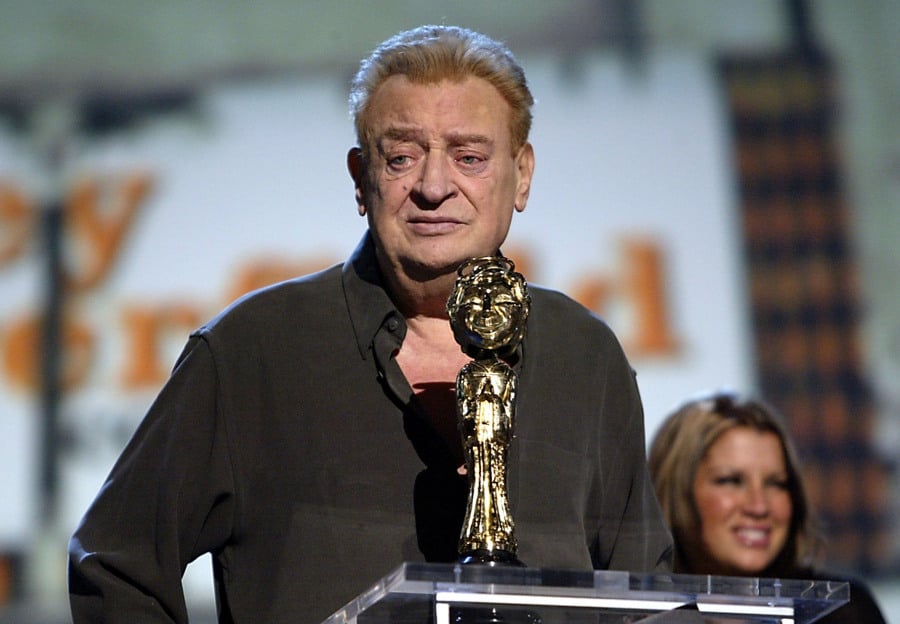 Personal Life: Dangerfield was twice wed to Joyce Indig, first from 1951 to 1961, and then from 1963 to 1970. They had two children, Brian Roy and Melanie Roy-Friedman. In 1993, he married Joan Child, with whom he stayed until his death.

Dangerfield passed away in 2004, three years after suffering a mild heart attack during a stand-up routine on "The Tonight Show," and almost two months after undergoing heart valve-replacement surgery. He was 82. Dangerfield is buried in Los Angeles' Westwood Village Memorial Park Cemetery, with his headstone epitaph reading, in characteristically self-deprecating fashion, "There goes the neighborhood."

Legacy and Honors: Dangerfield's impact is wide-reaching. In 2005, UCLA's Division of Neurosurgery named a suite of operating rooms after him, and honored him with the inaugural Rodney Respect Award. The following year, Comedy Central aired the special "Legends: Rodney Dangerfield" to commemorate his life; it featured comedians such as Chris Rock, Ray Romano, and Jerry Stiller.

Further, Dangerfield is known as the first celebrity to personally own and create content for a website, which he did in 1995. Relaunched by Dangerfield's widow in 2013, the website has since garnered multiple Webby Award nominations and one win. Other marks of his legacy include a 2014 posthumous honorary doctorate from Manhattanville College, and the Rodney Dangerfield Institute of Comedy, a stand-up comedy class taught at the Los Angeles City College Theatre Academy. The comic has also been recognized by the Smithsonian Institution, which put on display his trademark white shirts and red ties. 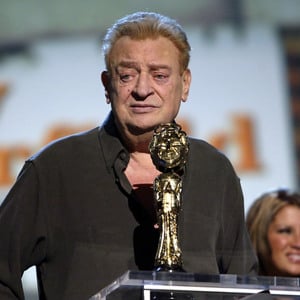