Robert Klein Net Worth: Robert Klein is an American actor, singer, comedian who has a net worth of $10 million. Klein was born in February of 1942 in the Bronx, New York. He has been quoted as describing his childhood as a "prototypical 1950s Bronx Jewish environment. After high school, having graduated from DeWitt Clinton High School, he went on to attend Alfred University from which he also graduated.

He'd planned to continue and study medicine, but transferred to Yale's Drama School after auditioning for The Second City, an acclaimed comedy troupe based out of Chicago. He was hired and became a regular cast member in 1965, before appearing on Broadway's The Apple Tree the following year. Klein then went on to appear in a number of television shows, most of which were comedy based. He also released various albums on which he sang and performed his standup routines. Both Jay Leno and Billy Crystal are said to have been influenced by Klein's comedy work, the latter of which, as a child, had a poster of Klein that he hung in his bedroom. In 1973 he married opera singer Brenda Boozer. The couple had one son, Alexander, before divorcing in 1989. 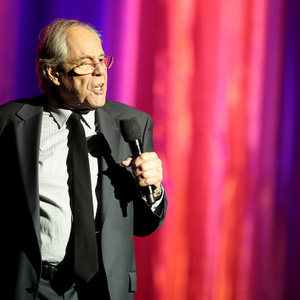