What was Redd Foxx's Net Worth?

Redd Foxx was an American comedian and actor who had a net worth of -$3.5 million. Unfortunately, at the time of his death he owed over $3.5 million in taxes. More information on his financial state towards the end of his life later in this article.

Redd Foxx was best known for starring in the television series "Sanford and Son" and for his explicit comedy albums. He gained fame as a raunchy nightclub act in the 1950s and 1960s. Foxx was named the "King of the Party Records" and appeared on over 50 records during his career. I 2004 he was named the 24th best stand-up comedian by Comedy Central Presents: 100 Greatest Stand-ups of All Time.

Foxx was born on December 9, 1922 and given the name John Elroy Sanford. He was born in St. Louis, Missouri to parents Fred Sanford and Mary Hughes. His father, Fred Sanford, worked as an electrician and auto mechanic. He left the family when Foxx was only four year old. He was then raised by his mother and grandmother in Chicago and grew up with his older brother, Fred Jr. Foxx enjoyed performing from a young age. When he was 16, he performed on the Major Bowes Amateur Hour radio show as part of the group, the Jump Swinging Six.

Foxx developed a stand-up comedy act in nightclubs that helped him achieve his initial success. He moved from Chicago to the East Coast in order to travel with the act. His big break came after singer Dinah Washington told him to go to Los Angeles. There, his act was seen by Dootsie Williams of Dootone records. He was signed to a long-term contract and released a series of comedy albums that have since become cult comedy favorites.

Foxx's transition into more mainstream media came a bit later in his life when he starred in the television sitcom, "Sanford and Son," an adaptation of the BBC series, "Steptoe and Son." Foxx played the role of Fred G. Sanford, the real name of his father and brother, while actor Demond Wilson played the role of his son. The series premiered on NBC in January of 1972 and was on air for six seasons. The show helped redefine the genre of black situational comedy. Foxx was able to use his lead role on the series to find jobs for some of his friends and acquaintances like Slappy White, Don Bexley, LaWanda Page, and Beah Richards, among others.

Foxx left "Sanford and Sons" after six seasons, which ultimately resulted in the end of the series. He then starred in a short-lived ABC variety show. In 1980, he reprised his role of Fred G. Sanford in the short-lived spin-off show, "Sanford."

In 1986, Foxx got his own show on ABC called "The Redd Foxx Show." However, due to low ratings, the show was cancelled after 12 episodes. He then appeared as character Obi-Wan Kenobi in the "Star Wars" special of the "Donny & Marie" show. In 1989, he played one of the main characters in the film "Harlem Nights," which was written, produced, and directed by Eddie Murphy, who also starred in the movie. He then had a starring role in the short-lived series, "The Royal Family," in 1991. 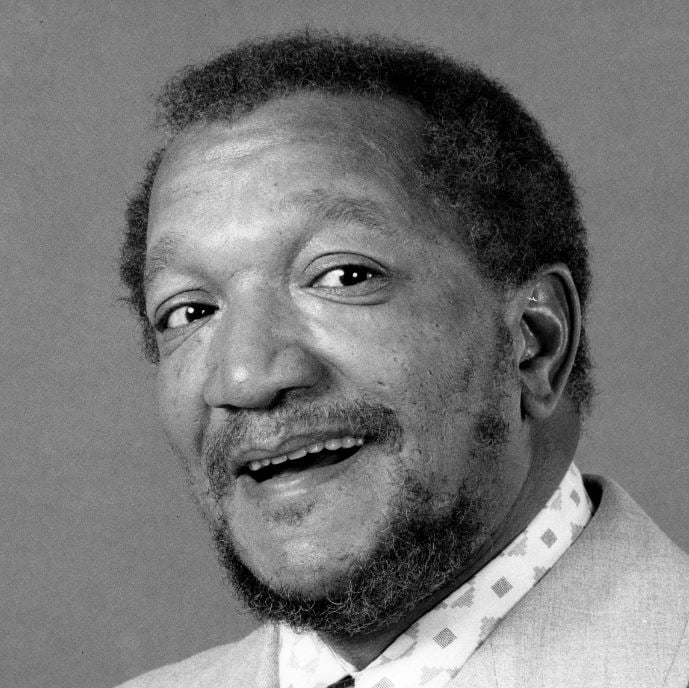 Foxx was married four times during his life. His first marriage was to Evelyn Killebrew in 1948. They remained married until their divorce in 1951. In 1956, he married showgirl and dancer, Betty Jean Harris. They had met at a nightclub where both were performing. Harris decided to give up her career to become a full time housewife and Foxx adopted Harris's daughter, Debraca. Harris handled most of Foxx's business ventures and schedule before they separated in 1974 due to Foxx's infidelity. They officially divorced after 18 years of marriage in 1974 and Foxx did not attend Debraca's wedding the following year. In 1976, Foxx married Joi Yun Chi Chung in Las Vegas. Joi was 20 years younger than Foxx and working as a cocktail waitress when they met. Their marriage also ended in divorce three years later in 1979.

In July of 1991, Foxx married Kaho Cho. The two had met at a hotel in Las Vegas. Despite having previously denounced marriage after his three prior divorces, Foxx stated that Cho had stuck by him through many financial troubles and he appreciated her loyalty. Only a few months after the marriage, Foxx suffered a heart attack while on set of "The Royal Family." He was taken to the Queen of Angels Hollywood Presbyterian Medical Center and was pronounced dead four hours later.

Foxx has been credited as inspiring a number of other comedians, like Richard Pryor and Chris Rock. Actor and comedian Jamie Foxx has also stated he chose his professional surname as a tribute to Foxx. Since his death, Foxx has also been portrayed in popular culture a number of times. He was portrayed by Aries Spears in the film "Why Do Fools Fall in Love" and his character from "Sanford and Sons" has appeared in shows like "Family Guy" and "Boondocks." Archive footage of him performing has been used in "Surely, You Jest," "Dolemite is My Name" in 2019, and "Marvelous Mrs. Maisel." His life and comedy have also been discussed in episodes of "Unsung Hollywood," "History of Comedy," "E! True Hollywood Story," "Laugh Mobb Present," and "Biography."

Foxx's divorces were very costly, in addition to Foxx's tendency towards living a lavish lifestyle and poor financial management. In 1983, he filed for bankruptcy and the IRS filed multiple tax liens against Foxx's property in an attempt to make up back income taxes he owed. His Las Vegas home was seized in 1989, along with seven of his vehicles. At the time of his death in 1991, Foxx's estate was in debt to the IRS to the tune of $3.5 million.