Peter Kay Net Worth: Peter Kay is a British comedian who has a net worth of $70 million dollars. Peter Kay was born July 2, 1973 in Farnworth, Lancashire, England, UK. His first stand-up competition was at the North West Comedian of the Year competition, held in Manchester, England. Kay was last on the bill and won the competition, beating out Johnny Vegas. His first television project was an episode of New Voices, a comedy series which showcased up-and-coming talent. His appearance on BBC2's The Sunday Show, in which Kay won a Royal Television Society award for Best Newcomer for one of the episodes, spawned a pilot called That Peter Kay thing (based on Kay's own experiences from earlier in his life while working various menial jobs). In November 2009, after a string of television, talk shows and even charity appearances, Kay returned to stand-up comedy, where his four-date tour turned into 40 dates due to his popularity. Kay's awards include being listed in The Observer as one of the 50 Funniest British Comedians and an official inauguration into the Guinness World Records as the most successful comedian of all time, playing to over 1.2 million people. Kay has also written, produced and acted in several award-winning television and film projects. He has authored three books, the first of which was The Sound of Laughter, which still remains the biggest-selling British autobiography to date. 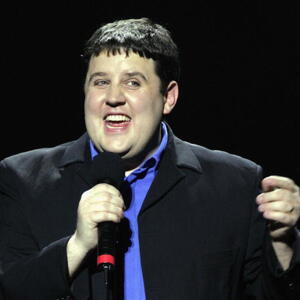