What is Paul Reubens' Net Worth and Salary?

Paul Reubens, also known by his character/alter ego, "Pee-Wee Herman", is an American comedian, actor and television personality who has a net worth of $5 million dollars. He is best known for appearing in a television show, live performances and movies as Pee-Wee Herman but has enjoyed a fairly successful career outside of that character as well.

Paul Reubens, was born Paul Rubenfeld in Peekskill, New York, on August 27, 1952. His parents, Judy (née Rosen) and Milton Rubenfeld, owned a lamp store in Sarasota, Florida, where he was raised with his two younger siblings, Abby and Luke. His father, Milton, had previously been an automobile salesman, and had also flown for the British Royal Air Force and the U.S. Army Air Forces in World War II, and was a founding pilot of the Israeli Air Force. During his childhood, Reubens spent a lot of time in going to circus shows of the Ringling Bros. And Barnum & Bailey Circus, as their winter headquarters were located in Sarasota, Florida. This early exposure to the circus sparked his interest in entertainment, and was influential on his own entertaining style.

He was a student at Sarasota High School, where he highly active in the theater and served as the president of the National Thespian Society. He was accepted into the summer program for gifted high-school students at Northwestern University. He attended college at Boston University, and auditioned for multiple acting schools. Eventually, after rejections from schools including Juilliard and Carnegie-Mellon, he moved to California to attended the California Institute of the Arts. While at school, he worked in restaurant kitchens and as a Fuller Brush salesman, and also performed at local comedy clubs in the 1970s. He was a member of the Los Angeles improvisational comedy team The Groundlings for six years.

The character "Pee-Wee Herman" was created during a 1978 improvisational session with The Groundlings. He is based on the idea of a man who wants to become a comic, but is so bad at telling jokes that it is obvious to everyone that he is never going to succeed. He adopted Pee-Wee's signature way of speaking in 1970, when Reubens was in a production of "Life with Father" and was cast as extremely obnoxious character. The name "Pee-Wee" came from the Pee Wee brand harmonica, and the name "Herman" is the name of a boy Reubens knew growing up.

Initially, Reubens had auditioned for the 1980-1981 season of "Saturday Night Live", but Gilbert Gottfried, who had a similar acting style and was close friends with a producer of the show, got cast instead. Bitter about the rejection, Reubens borrowed money and started his own show in Los Angeles based on the Pee-Wee Herman character. He was supported by other Groundlings, like John Paragon, Phil Hartman, and Lynne Marie Stewart. "The Pee-Wee Herman Show" ran for five sellout months at The Roxy Theatre; he performed midnight shows for adults, and matinee shows for children. HBO helped him take his show mainstream, airing "The Pee-Wee Herman Show" in 1981 as part of their "On Location" series. As the popularity of Pee-Wee grew, Reubens began making all public appearances and interviews in character, and billing the character as Pee-Wee himself rather than his real name, with the goal to "get the public to think that that was a real person." Further appearances on shows like "Late Night with David Letterman" in the mid-1980s as Pee-Wee, as well as taking "The Pee-Wee Herman Show" on the road and performing around the country, helped to increase his fame and success. 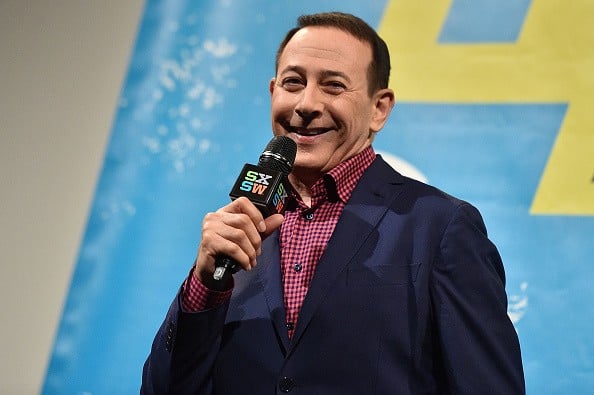 Based on the success and popularity of "The Pee-Wee Herman Show", Warner Bros. decided to get Reubens to write a full-length Pee-Wee Herman film. "Pee-Wee's Big Adventure" (1985) follows Pee-Wee as he goes on a nationwide journey to recover his stolen bike. Reubens and the movie's producers chose Tim Burton to direct the film after they saw his work on "Vincent" (1982) and "Frankenweenie" (1984). The movie was a massive success, grossing over $40 million domestically against it's modest $7 million budget. Despite mixed critical reviews, the show has gone on to achieve cult film status. In 1986, CBS approached Reubens to create his own live-action children's program. He was not only an actor on the program, but also produced and directed the series. "Pee-Wee's Playhouse" aired from 1986 to 1990, and had a budget of $325,000 per episode. Although it was targeted towards kids, many adults also enjoyed it as well.

His career had a terrible setback in 1991 when he was arrested in Florida and charged with indecent exposure. The scandal soiled his squeaky-clean image and CBS dropped reruns of Pee-Wee's Playhouse from its lineup. He also tried to resuscitate his acting career by appearing in such films as "Buffy the Vampire Slayer" (1992), "Matilda" (1996), "Mystery Men" (1999) and "Blow" (2001). He subsequently landed a recurring role on the popular sitcom "Murphy Brown". In recent years, he brought his popular character to Broadway in 2010, starring in "The Pee-Wee Herman Show". He made his debut as the voice of Jokey in the popular family comedy "The Smurfs" the following year, and worked on its 2013 sequel as well.

In addition to his 1991 arrest, Herman was arrested in 1971 for loitering and prowling (charges were dropped). In 1983, he was placed on probation for two years due to possession of marijuana. And, in 2002, he was arrested and charged with possession of obscene material improperly depicting a child under the age of 18 in sexual conduct. He maintained his innocence, saying that the alleged pornography materials discovered in his home were, instead, part of his vintage erotica collection.