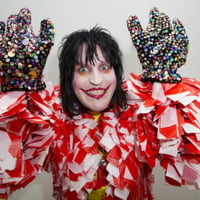 Noel Fielding net worth: Noel Fielding is an English comedian, writer, actor, artist, and musician who has a net worth of $6 million. Noel Fielding was born in Westminster, London, England in May 1973. From 2003 to 2007 he starred in the television series The Mighty Boosh which he also co-wrote. From 2006 to 2013 he starred as Richmond on the TV series The IT Crowd. From 2012 to 2014 he starred on the series Noel Fielding's Luxury Comedy. Fielding has also appeared in the films Plunkett & Macleane, Bunny and the Bull, Come on Eileen, Horrid Henry: The Movie, Aaaaaaaah!, Set the Thames on Fire, and Brakes. Noel Fielding was a team captain on the BBC Two series Never Mind the Buzzcocks from 2009 to 2015. He co-founded the band Loose Tapestries. Fielding was nominated for a British Comedy Award in 2004 for Best TV Comedy Newcomer for The Mighty Boosh.