What was Moe Howard's Net Worth and Salary?

Moe Howard was an American actor and comedian who had a net worth equal to $10 million at the time of his death, adjusting for inflation. Moe Howard was best known as the leader of the comedy team the Three Stooges. In that role, he appeared on television and in films for four decades alongside costars Larry Fine, Shemp Howard, Curly Howard, Joe Besser, and Joe DeRita. As one of the Stooges, Howard was iconic for his distinctive bowl-cut hairstyle and short temper. Howard had over 240 acting credits from 1909 to 1973. Howard was awarded a star on the Hollywood Walk of Fame with Larry and Curly in 1983 at 1560 Vine Street. Moe Howard passed away on May 4, 1975 at 77 years old from lung cancer.

Moe Howard was born as Moses Harry Horwitz on June 19, 1897 in Brooklyn, New York as the fourth of five sons of Jewish parents Solomon and Jennie. He achieved his trademark bowl-cut hairstyle early on in life by cutting his curls with a pair of scissors in the backyard. Howard also developed a nascent love of acting, which prompted him to skip school to see shows at the local theater. Despite his poor attendance, he still managed to graduate from P.S. 163; however, his formal education ended when he dropped out of Erasmus Hall High School after two months.

For his first sort-of job, Howard ran unpaid errands at Vitagraph Studios in Brooklyn. As compensation, he was given bit parts in some of the studio's films. However, a fire in 1910 destroyed most of the films made there. Howard continued to try to gain experience in show business. With his older brother Shemp, he sang in a bar; later, he joined a minstrel show troupe on a Mississippi River showboat.

Ted Healy and His Stooges

In the early 20s, Howard joined Ted Healy in a vaudeville act. Later in the decade, Healy, Howard, and future Three Stooges cast mates Larry Fine and Shemp Howard came together to appear in the revue "A Night in Venice." As a result, Ted Healy and His Stooges was born. Building on a wave of growing popularity, the group made its first movie, "Soup to Nuts," in 1930; the film also featured Fred Sanborn from Healy's vaudeville troupe. Following this, a disagreement with Healy resulted in his departure, leaving the group as Howard, Fine, and Howard. The trio premiered its act at Los Angeles' Paramount Theatre, and then went on tour on the RKO vaudeville circuit.

In 1932, Howard, Fine, and Howard accepted an offer to rejoin Healy for the new Broadway revue "Passing Show of 1932." However, Shemp Howard eventually left the group due to internal conflict; replacing him was Howard's brother Jerome, who adopted the stage name Curly. The new lineup of Moe, Curly, and Larry debuted alongside Ted at Cleveland's RKO Palace. 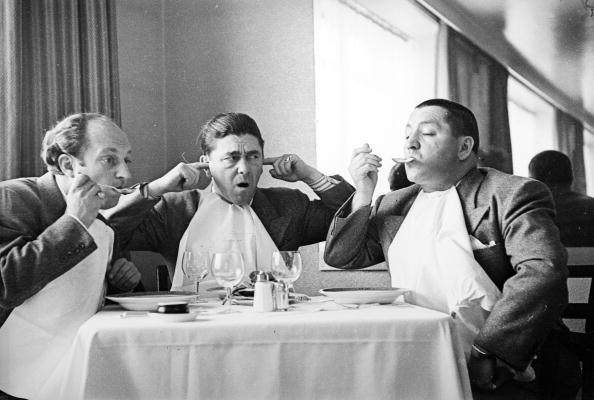 Eventually, Healy began developing a career as a solo comedian, and left the group. Consequently, His Stooges became renamed the Three Stooges. The trio went on to sign with Columbia Pictures, for which it made nearly 200 comedy shorts through the late 50s. Notably, Moe Howard assumed Healy's former role as the belligerent leader of the group, whose ill temper led to an array of slapstick violence against his fellow Stooges.

Among the most famous of the early Three Stooges shorts are "Punch Drunks," the only short written entirely by the trio; "Men in Black," the only one to be nominated for an Academy Award; and "Three Little Pigskins," which featured a young Lucille Ball. In the 40s, the Three Stooges made a number of anti-Nazi shorts, including "I'll Never Heil Again" and "They Stooge to Conga." During production on the short "Half-Wits Holiday" in 1946, Curly Howard suffered a stroke; it came after a series of other strokes from earlier in the year. Curly later passed away in early 1952 following another series of strokes. The Stooges went on to bring Shemp Howard back into the act.

In the 50s, the Three Stooges' short films remained popular with audiences. Additionally, the trio costarred alongside George O'Brien in the 1951 comedy Western film "Gold Raiders." Four years after that, Shemp Howard passed away from a heart attack, requiring the addition of another Stooge. In 1956, Joe Besser was hired to replace him. Later, Howard decided to put together a new Stooges act with comic Joe DeRita in place of Besser. The new trio subsequently starred in six full-length feature films from 1959 to 1965. They were "Have Rocket, Will Travel"; "Snow White and the Three Stooges"; "The Three Stooges Meet Hercules"; "The Three Stooges in Orbit"; "The Three Stooges Go Around the World in a Daze"; and "The Outlaws is Coming." The trio also made guest appearances in "It's a Mad, Mad, Mad, Mad World" and "4 for Texas."

On television in the 60s, the Three Stooges made appearances on "The Steve Allen Show," "Masquerade Party," "The Joey Bishop Show," and "Truth or Consequences," among other programs. However, by the end of the decade, the men were at an age where performing slapstick was no longer worth the physical risk. The Stooges worked on a film in 1969 called "Kook's Tour," but production was halted when Larry had a major stroke during filming; he later passed away in 1975.

In 1925, Howard wed Helen Schonberger, a cousin of Harry Houdini. Together, the couple had two children named Joan and Paul.

A heavy smoker, Howard passed away from lung cancer in 1975, almost four months after the passing of fellow Stooge Larry Fine. He was 77 years of age. Howard's wife passed away later in the year. In 1983, Howard and the Three Stooges were given a posthumous star on the Hollywood Walk of Fame. 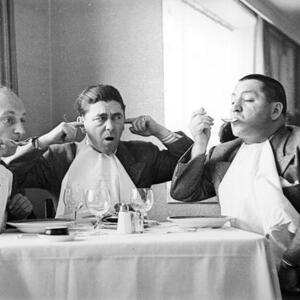