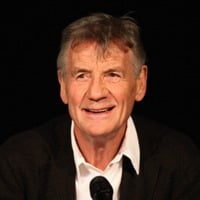 Michael Palin net worth: Michael Palin is a British travel presenter and comedian who has a net worth of $25 million. Michael Palin earned his net worth as a comedian (mainly with Monty Python), actor and writer. Before he became a respected travel presenter, Palin was one of the prominent members of the surreal comedy sketch Monty Python. Before he gained prominence with Monty Python, Palin (alongside writing partner and fellow Monty Python member Terry Jones) produced some of the sketches on The Ken Dodd Show, The Frost Report and Do Not Adjust Your Set. The duo went on to produce the BAFTA award-winning comedy series, Ripping Yarns. Palin is also a notable actor, appearing in several films, including A Fish Called Wanda, where he won a BAFTA award for best supporting actor. When Monty Python ended in 1983, Palin became a travel presenter, producing a string of notable programmes, including Michael Palin: Around the World in 80 Days and Full Circle with Michael Palin and. He has written several books documenting his experience of each trip. His work as a travel presenter hasn't gone unnoticed as Palin was awarded a CBE in 2000. He is currently the president of Royal Geographical Society.