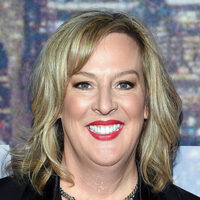 Melanie Hutsell net worth: Melanie Hutsell is an American actress who has a net worth of $500 thousand. Melanie Hutsell was born in Maryville, Tennessee in August 1968. She is best known for being a cast member on the NBC television series Saturday Night Live. She started out doing improv comedy at the Annoyance Theater in Chicago, Illinois. She was a featured player on Saturday Night Live from 1991 to 1993 and a regular cast member from 1993 to 1994. Her most recognizable recurring character was Jan Brady which she also played on stage. She also did celebrity impressions of Tori Spelling and Tonya Harding. She starred in the movies The Thin Pink Line in 1998 and Can't Stop Dancing in 1999. Hutsell quit acting to raise her daughter but returned in 2009 when she starred in the movie He's Such a Girl. She went on to star in the movies Bridesmaids and Grown Ups 2 and has also appeared in episodes of the TV series Pretty the Series and Suburgatory.