What is Martin Short's Net Worth and Salary?

Martin Short is a Canadian actor, comedian, writer, and producer who has a net worth of $50 million. Martin Short has established himself as an energetic comedic player in film and on TV over the last several decades. Martin was a writer and performer on sketch comedy show "SCTV" (1981–1984) and a member of Toronto's Second City comedy troupe before moving to New York. In 1984, he was cast on "Saturday Night Live" and was catapulted to international stardom, starring in such films as "Three Amigos" (1986), "Father of the Bride" (1991), "Mars Attacks!" (1996), and "Jungle 2 Jungle" (1997).

Martin Short is known for memorable characters like Ed Grimley and Jiminy Glick, and he has created several TV shows, including two different series entitled "The Martin Short Show" (1994; 1999–2000). Martin was named a Member of the Order of Canada in 1994 and an Officer of the Order of Canada in 2019, and he released his memoir, "I Must Say: My Life As a Humble Comedy Legend," in 2014.

Martin Short was born Martin Hayter Short on March 26, 1950, in Hamilton, Ontario, Canada. His mother, Olive, was a concertmistress of the Hamilton Symphony Orchestra, and his father, Charles, was an executive with Canadian steel company Stelco. Short grew up in a Catholic household with four older siblings, David, Brian, Michael, and Nora. David tragically died in a car accident when Martin was 12 years old, and Olive died of cancer in 1968, two years before Charles passed away from a stroke. Short studied at Westdale Secondary School and earned a B.A. in Social Work from McMaster University in 1971; the school awarded him an honorary Doctor of Literature in 2001. In 1972, he was cast in "Godspell" alongside Gilda Radner, Eugene Levy, and Andrea Martin (his future sister-in-law), and his career aspirations turned from social work to acting.

Martin made his television debut in 1972 on the Canadian shows "Right On" and "Cucumber." He also appeared on 10 episodes of "The David Steinberg Show" (1976–77), and he joined Toronto's The Second City improv group in 1977, which led to a writing job on "Second City Television" (better known as "SCTV") in 1981. Short was a performer on the show from 1982 to 1983, then he joined the cast of "Saturday Night Live" in 1984. Though Martin was only a cast member for one season, he has returned to "Saturday Night Live" several times, including three hosting stints and the 40th anniversary special. Short co-created the animated series "The Completely Mental Misadventures of Ed Grimley" (1988) and NBC variety show "Maya & Marty" (2016), and he created "Primetime Glick" (2001–2003) as well as two incantations of "The Martin Short Show;" the 1994 version was a sitcom, and the 1999 version was a syndicated talk show. Martin has guest-starred on dozens of television shows, such as "Arrested Development" (2005), "How I Met Your Mother" (2011–2012), and "Unbreakable Kimmy Schmidt" (2015), and in 2018, he starred in the Netflix special "Steve Martin and Martin Short: An Evening You Will Forget for the Rest of Your Life." 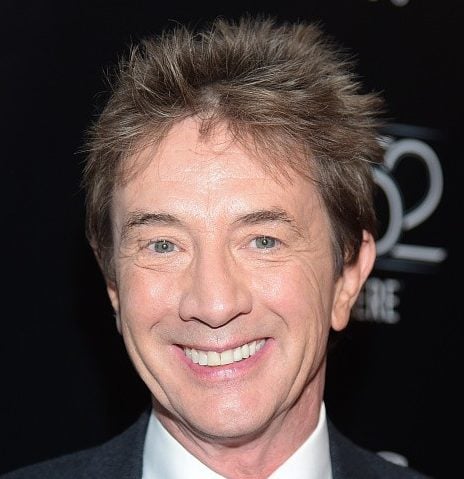 In 1993, Short starred in Neil Simon's "The Goodbye Girl" on Broadway, earning his first Tony nomination. In 1999, he won a Tony for Best Actor in a Musical for his performance in "Little Me," and in 2003, he played Leo Bloom in a Los Angeles production of "The Producers." Martin starred in the one-man show "Martin Short: Fame Becomes Me" on Broadway from August 2006 to January 2007, then returned to the same theatre, the Bernard B. Jacobs Theatre, in 2015 to star as James Wicker in "It's Only a Play."

Martin dated Gilda Radnor after meeting her during a 1972 production of "Godspell." In 1974, he began a relationship with Gilda's understudy, Nancy Dolman, and the two were married on December 22, 1980. The couple adopted three children together: daughter Katherine (born in 1983), son Oliver (born in 1986), and son Henry (born in 1989). Marty became a first-time Grandfather in January 2020 Sadly, Nancy passed away from ovarian cancer in August 2010.

Martin Short holds citizenship in Canada, the United States, England and Ireland. His father was born in Ireland and his uncle Paddy and family still own Short's Pub located in Northern Ireland.

He is passionate about charity work. He has supported the Women's Research Cancer Fund and accepted the organization's "Courage Award" on Nancy's behalf in 2011. Martin is also a member of Artists Against Racism, and he won $32,000 for Loyola High School on "Celebrity Who Wants to Be a Millionaire" in 2001.

In 1983, Short won a Primetime Emmy Award for Outstanding Writing in a Variety or Music Program for "SCTV," and he earned an Outstanding Variety Special Emmy in 2014 for "AFI Life Achievement Award: Mel Brooks." Martin has won several awards for his stage work, including an Outer Critics Circle Award and Theater World Award for "The Goodbye Girl" in 1993 and an Outer Critics Circle Award and Tony Award for "Little Me" in 1999. He won four Canadian Screen Awards between 2016 and 2019, including a Lifetime Achievement Award, and he earned the Earl Grey Lifetime Achievement Award in 1995. Short received the Queen Elizabeth II Golden Jubilee Medal in 2002 and the Diamond Jubilee Medal in 2012. Martin received a star on Canada's Walk of Fame in 2000, and in 2014, Canada Post released a series of stamps honoring five Canadian comedians: Short, Mike Myers, Catherine O'Hara, Jim Carrey, and Olivier Guimond.

In 2014, Martin paid $1.1 million for an 1,836 square foot home in the Beachwood Canyon area of Los Angeles. He reportedly purchased the 3-bedroom home for his daughter, and it's not far from Short's house in Pacific Palisades. Martin also owns a cottage on Lake Rosseau in Ontario.