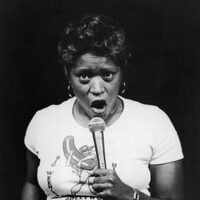 Marsha Warfield net worth: Marsha Warfield is an American actress and comedian who has a net worth of $3 million. Marsha Warfield was born in Chicago, Illinois in March 1954. One of her best known roles came starring as Rosalind "Roz" Russell on the television series Night Court from 1986 to 1992. Warfield starred as Dr. Maxine Douglas on the TV series Empty Nest from 1993 to 1995. She appeared in the films D.C. Cab, Mask, The Whoopee Boys, and Caddyshack II. Warfield has also appeared in episodes of the TV series The Richard Pryor Show, Riptide, Family Ties, Cheers, Hangin' with Mr. Cooper, The Addams Family, Saved by the Bell: The College Years, The John Larroquette Show, Touched by an Angel, Smart Guy, Mad About You, Moesha, Living Single, Clueless, Love Boat: The Next Wave, Goode Behavior, Dave's World, Relatively Speaking, and Veronica's Closet. Warfield appeared in the TV movies The Marva Collins Story, Anything for Love, Who Shrunk Saturday Morning?, and Cosmic Shock.