What was Lucille Ball's net worth and salary?

Lucille Ball was an American comedian, actress, model, and businesswoman who had a net worth of $60 million dollars at the time of her death in 1989. That's the same as $125 million in today's dollars (after adjusting for inflation). She starred in a number of successful films, before producing and starring in "I Love Lucy", the television show that would bring her lasting fame.

Lucille was also a shrewd business woman and the entertainment industry's first female mogul. As we detail later in this article, Desi and Lucille brilliant struck a deal that gave them ownership of their own show. They sold their episodes to CBS in 1957 for $4.5 million ($40 million in today's dollars). They used the windfall to build out their own production company. Lucille bought Desi's share of the company in 1962 for $2.5 million. She sold the entire company to Gulf+Western five years later for $17 million – the same as $130 million in today's dollars.

Lucille Ball was born in Jamestown, New York on August 6, 1911. Her childhood was very fractured, with her father transferred frequently for his work with Bell Telephone, and she grew up living with her very strict, Puritanical grandparents. Ball's father died from typhoid fever when he was just 27 years old and Ball was only three. She began performing when she was twelve and quickly fell in love with the theater. She attended the John Murray Anderson School for the Dramatic Arts in New York while in her late teens where Bette Davis was a fellow student, and then attempted to pursue a career in the New York theater scene. She did quite well initially, but her health failed her, and she was forced to stop acting for two years due to a serious case of rheumatic fever.

In 1932, a recovered Lucille Ball moved back to New York City to resume her pursuit of an acting career. She supported herself by working for Carnegie as the Chesterfield cigarette girl and began getting chorus work on Broadway, but was quickly fired. She appeared in 1933's "Roman Scandals" in an uncredited stint and subsequently permanently moved to Hollywood with the goal to be a film star. Throughout the '30s she had many small movie roles, including a movie with the Marx Brothers and several Fred Astaire and Ginger Rogers musicals. In 1936, Ball appeared in the play "Hey Diddle Diddle", a comedy set in a duplex apartment in Hollywood. She auditioned for 1936's "Gone with the Wind" but lost out to Vivien Leigh, who famously went on to win an Oscar for Best Actress for her role. Lucy starred in the musical "Too Many Girls," where she met and fell in love with co-star Desi Arnaz. Alongside small movie and theater gigs throughout the late '30s and early '40s, Ball picked up radio work to supplement her income and gain exposure for herself. The mid-forties saw Ball picking up more starring roles in movies like "Best Foot Forward," "Lover Come Back," and murder mystery "Lured."

In 1948, Lucy was cast as Liz Cooper in the CBS radio comedy "My Favorite Husband." The show was so successful that CBS approached her to develop it for television. Ball agreed but insisted on starring with her real-life spouse Desi Arnaz. CBS executives were at first reluctant, thinking America was not ready to see an All-American redhead and a Cuban as a couple. CBS was unimpressed with the pilot episode, so Lucy and Desi took their act on the road as a vaudeville show. Lucy played the role of a "zany housewife" desperate to get on Arnaz's show. The tour was greatly successful, and CBS subsequently put the show, "I Love Lucy", onto their lineup.

"I Love Lucy" was an immediate success and turned the two stars into household names. Ball also saw the show as an opportunity to help fix her marriage to Arnaz, which had become strained by their hectic schedules and Desi's wandering eye. Ball made history when she became the first woman to head a TV production company, Desilu, formed with Arnaz (she bought out his share when they divorced in 1960.) Desilu pioneered many methods still in use in TV production today, such as filming before a live studio audience.

During breaks in production, Lucy and Desi also starred together in two feature films: 1954's "The Long, Long Trailer" and "Forever Darling" in 1956. Desilu went on to produce several other popular shows such as "The Untouchables," "Star Trek," and "Mission: Impossible,"

"I Love Lucy" dominated U.S. ratings for the majority of its 1951-1957, 180 episode run. It was the most-watched show in the United States in four of its six seasons and ended its run at the top of the Nielsen ratings. Episodes of the show have been syndicated in dozens of languages across the world. Modified versions of the show ("The Lucille Ball-Desi Arnaz Show" and the "Lucy-Desi Comedy Hour") ran for three more seasons after the series ended, from 1957-1960. "I Love Lucy" is often regarded as one of the greatest, most influential sitcoms in the history of television. 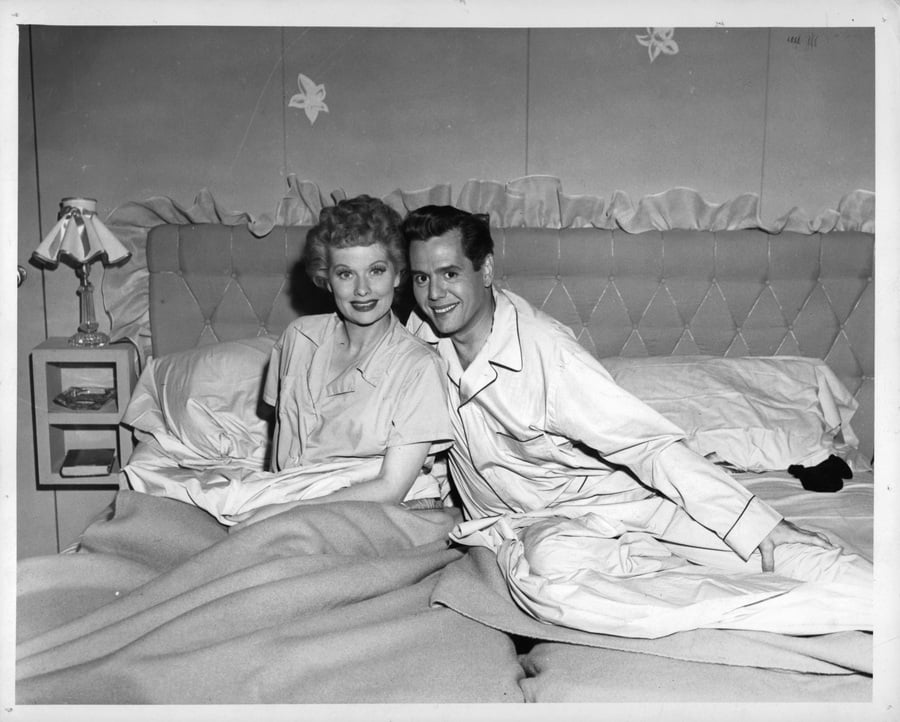 Desi and Lucille formed their own production company, Desilu Productions, in 1950. They originally formed the company to produce their vaudeville act. In their early days, Ball handled artistic and creative decisions while Arnaz handled the business side of the company. Being a Cuban immigrant with no business experience would later turn out to be extremely lucrative to Desi and Lucille. One example of his unusual business decisions was to request a season's worth of production costs for the first episode, rather than spreading the costs out. By doing so, and sticking to his budget, the show turned out to be extremely cheap to produce, by comparison to other contemporary series. They stuck to the budget because Lucille and Desi paid the costs of the first episode.

His biggest accidental brilliant decision was to demand that the show use film across the country when syndicated instead of a lower-quality medium called kinescope. Studio executives scoffed at the expense of broadcasting film to every station in the country. Desi got the studio to concede to his demand by agreeing that he and Lucille would take a pay cut. BUT he threw in a bonus request – He stipulated that he and Lucille would own the physical film prints and therefore the re-broadcast rights. This stipulation would eventually earn the couple an enormous fortune when the show became the most popular syndicated program in history. It's considered the shrewdest business deal in TV history to this day.

In 1957 CBS bought back the rights to the show's 180 episodes for $4.5 million. That's the same as $40 million today. This was a wise decision, albeit an expensive one, because to this day CBS earns over $20 million per year from "I Love Lucy" re-runs.

That same year, Lucille and Desi used the money a down payment on a new studio lot that would be their own. In 1957 Desilu paid $6 million for RKO Studios and its 14-acre movie lot. Lucille was now officially the first major female production mogul.

Desilu would go on to produce a number of hit shows like "The Untouchables", "The Ann Sothern Show" and "Sheriff of Cochise". Their lot was also the production home of "The Dick Van Dyke Show", "The Andy Griffith Show", "My Three Sons" and more.

They took Desilu public in 1958, at which point the company had 800+ employees and more than $20 million in annual revenue.

Lucille and Desi divorced in 1960. In 1962, Lucille bought Desi's shares in their company for $2.5 million. That's the same as around $20 million in today's dollars.

Lucille poured herself into the production and creative side of the business. In 1964 Lucille green-lit Gene Roddenberry's "Star Trek". She gave Roddenberry the resources he needed to film a pilot episode called "The Cage". NBC rejected the pilot. At Lucille's urging, NBC allowed Roddenberry to produce a second pilot, this one starring William Shatner. The rest was history.

In 1967 Lucille Ball sold Desilu to Gulf+Western for $17 million. That's the same as $130 million in today's dollars. Gulf+Western transformed Desilu into the production offshoot of Paramount Pictures. The two arms were eventually renamed Paramount Studios. 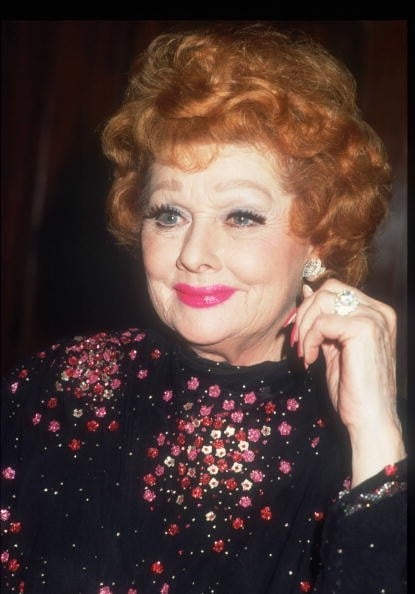 Ball starred in the 1960 Broadway musical "Wildcats", but the curtains closed early when Lucille contracted a virus and couldn't recover and continue the show. She hosted CBS Radio talk show "Let's Talk to Lucy" from 1964-1965. She made a few more movie appearances and then starred in two more successful CBS sitcoms: "The Lucy Show" from 1962 to 1968, and "Here's Lucy" which featured her real-life children Lucie and Desi Arnaz Jr. The show ran from 1968-1974. Ball was the lead actress in numerous comedy TV specials until 1980. In 1979, Ball became an assistant professor at California State University in Northridge and taught comedy courses.

During the mid-eighties, Ball attempted to resurrect her TV career. She starred in a dramatic made-for-TV movie in 1985, "Stone Pillow," in which she portrayed an elderly homeless woman. Her 1986 sitcom comeback "Life With Lucy", produced by Aaron Spelling, was canceled less than two months into its ABC run. Ball's last public appearance was just one month before her death at the 1989 Academy Awards telecast. She and her fellow presenter Bob Hope were given a standing ovation. Ball died on April 26, 1989 of a ruptured abdominal aortic aneurysm, following an unrelated heart surgery she had undergone a week earlier. She was 77 years old.

Ball filed for divorce from Arnaz in 1944. However, they reconciled shortly after and Ball gave birth to their daughter Lucie in July 1951. Their second child, Desi Arnaz Jr., was born in January 1953. The couple divorced in May 1960, but remained close friends and collaborators and often spoke fondly of each other in public. Lucille visited Desi a week before his death in 1986.

Ball wed her second husband Gary Morton in 1961 and the two were married until her death in 1989.