How much is Loni Love Worth?

Loni Love net worth: Loni Love is an American comedienne who has a net worth of $1 million. Loni Love was born in Detroit, Michigan, and began working for General Motors after graduating from high school. She subsequently won a scholarship to attend Prairie View A&M University, where she earned a degree in Electrical Engineering. While completing her degree, she won a local stand-up comedy competition, and began performing whenever she had the chance. After completing her degree, she worked for Xerox for eight years, while continuing to perform stand-up at clubs such as the Laugh Factory. She ultimately resigned from Xerox, and began focusing on comedy full-time. Since making a name for herself nationally, appearing on "Star Search", she has worked steadily in both film and television projects, including "Girlfriends", "Ned's Declassified School Survival Guide", "Cuts", "Thick and Thin", "Kickin' It", and "Soul Plane". She has also appeared as a stand-up comedian or panelist on such shows as "Premium Blend", "Comics Unleashed", "The Tonight Show with Jay Leno", and "GSN Live", She is a regular on "Chelsea Lately". 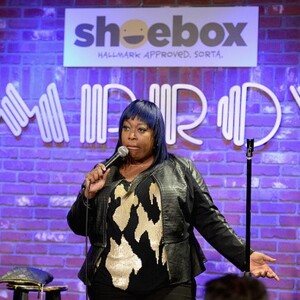