What is Lily Tomlin's net worth and Salary?

Lily Tomlin is an American actress, comedian, writer and producer who has a net worth of $20 million dollars. In a career spanning over 40 years, Lily Tomlin has won numerous awards, including a Tony Award for Best Actress, a Grammy Award for Best Comedy Album, and multiple Emmy Awards for Outstanding Writing. Lily Tomlin first achieved recognition for her performances on the variety show "Rowan & Martin's Laugh-In." Following this, she made her film debut in Robert Altman's "Nashville," earning an Academy Award nomination. Among Tomlin's other credits are "The Late Show," "9 to 5," "Tea with Mussolini," "Grandma," the Netflix series "Grace and Frankie," and the children's animated series "The Magic School Bus," on which she voiced the character Ms. Frizzle.

Lily Tomlin was born as Mary Jean Tomlin in 1939 in Detroit, Michigan. Her mother, Lillie Mae, was a nurse's aide and housewife, while her father, Guy, was a factory worker; both were Southern Baptists originally from Paducah, Kentucky. Tomlin has a younger brother, Richard. After graduating from Cass Technical High School, she enrolled at Wayne State University, where she studied biology before switching her major to theatre. Following her graduation, Tomlin started performing stand-up comedy at nightclubs in Detroit, and then in New York City. In 1965, she made her first television appearance on "The Merv Griffin Show," and the next year, was cast on the short-lived and final iteration of "The Garry Moore Show."

After briefly serving as a host on the ABC series "Music Scene" in 1969, Tomlin had her career breakthrough when she joined the cast of the NBC sketch comedy "Rowan & Martin's Laugh-In." On the show, she was an instant success, gaining recognition for the many original characters she created. Among her roles were Ernestine, a brash telephone operator; Edith Ann, a precocious girl; Mrs. Earbore, a priggish woman; and Lucille the Rubber Freak, a lady addicted to consuming rubber. Tomlin also portrayed the male characters Tommy Velour and Rick, making her one of the first major female comedians to appear in male drag.

Following "Laugh-In," Tomlin co-wrote and starred on the CBS variety show special "Lily," for which she won her first Emmy Award. Throughout the rest of the 70s and 80s, Tomlin often made appearances as herself on various television programs, including "The Carol Burnett Show," "The Electric Company," "Woman Alive!," "Saturday Night Live," and "Pryor's Place." She also received Emmy Awards for three television specials: 1975's "The Lily Tomlin Special," 1977's "The Paul Simon Special," and 1981's "Lily: Sold Out."

Following a nearly ten-year hiatus from television, Tomlin made her return to the small screen in the television film "And the Band Played On," earning her an Emmy nomination for Outstanding Supporting Actress in a Miniseries or Movie. Subsequently, she began voicing the teacher Ms. Frizzle on the children's series "The Magic School Bus"; for her voice role, which she performed until 1997, Tomlin received multiple Daytime Emmy Award nominations and one win. Also in the 90s, the actress was on the sitcom "Murphy Brown" as the title character's boss, and appeared in an episode of "Homicide: Life on the Street" as a murder suspect. Later, from 2002 to 2006, she played the recurring role of presidential secretary Deborah Fiderer on the political drama series "The West Wing"; for her performance, she earned a Screen Actors Guild Award nomination. Other credits in the 2000s included "Will & Grace," "12 Miles of Bad Road," and "Desperate Housewives."

In 2010, Tomlin received yet another Emmy nomination for her guest-starring role as Marilyn Tobin in the third season of "Damages." Afterward, she appeared on "NCIS" and the Showtime series "Web Therapy," and guest-starred on HBO's "Eastbound and Down" as the mother of the main character. After costarring with Reba McEntire on the short-lived "Malibu Country," Tomlin landed one of her most acclaimed roles ever on the Netflix original series "Grace and Frankie." Playing Frankie Bergstein opposite Jane Fonda's Grace Hanson, Tomlin earned a plethora of accolades for her work, including Emmy, Golden Globe, and Screen Actors Guild nominations.

Tomlin made her feature film debut in 1975, playing a gospel-singing mother of two deaf children in Robert Altman's musical ensemble drama "Nashville." For her performance, she was nominated for the Academy Award for Best Supporting Actress. She continued her success in 1977, when she starred alongside Art Carney in the comedy-mystery "The Late Show." In 1980, Tomlin teamed up with Jane Fonda and Dolly Parton to star in the comedy "9 to 5," which became one of the year's highest-grossing films. Following this, she was in the science-fiction comedy "The Incredible Shrinking Woman"; the fantasy comedy "All of Me," costarring Steve Martin; and the comedy "Big Business," with Bette Midler. In 1991, Tomlin starred in the film version of her one-woman stage show, "The Search for Signs of Intelligent Life in the Universe." Subsequent credits in the 90s included "The Player," the film adaptation of "The Beverly Hillbillies," "Short Cuts," "Blue in the Face," "Getting Away with Murder," "Flirting with Disaster," and "Tea with Mussolini."

In the early 2000s, Tomlin was in the comedies "The Kid," "Orange County," and "I Heart Huckabees." In 2006, she had an acclaimed role opposite Meryl Streep in Robert Altman's final film, "A Prairie Home Companion." Later credits include "The Walker," "The Pink Panther 2," "Admission," and "Grandma." For the latter, Tomlin received a Golden Globe nomination.

In 1971, Tomlin met her future wife, writer Jane Wagner. In 2013, after being together for 42 years, they were finally able to marry at a private ceremony in Los Angeles. Tomlin and Wagner have done multiple artistic collaborations over the years; among their projects, they worked together on Tomlin's comedy album "And That's the Truth," and on the documentary film "An Apology to Elephants." 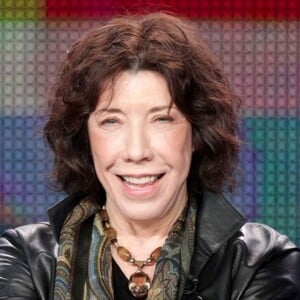