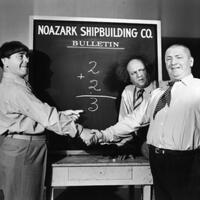 Larry Fine net worth: Larry Fine was an American comedian, actor, violinist, and boxer who had a net worth of $10 million. Larry Fine was born in Philadelphia, Pennsylvania in October 1902 and passed away in January 1975. Fine was best known for being a member of the American farce comedy team The Three Stooges. The Three Stooges featured Fine with brothers Curly Howard, Moe Howard, and Shemp Howard. Fine had over 230 acting credits from 1930 to 1970. He starred in the films Turn Back the Clock, Meet the Baron, Dancing Lady, Fugitive Lovers, Hollywood Party, The Captain Hates the Sea, Start Cheering, Time Out for Rhythm, My Sister Eileen, Rockin' in the Rockies, and Swing Parade of 1946. He also starred as Larry in the 1965 television series The New 3 Stooges. He started his career as a violinist in vaudeville before meeting Moe Howard. He was known for spending his money as soon as he earned it and had a gambling addiction. Fine was awarded a star on the Hollywood Walk of Fame with Larry and Curly in 1983 at 1560 Vine Street. Larry Fine passed away on January 24, 1975 at the age of 72.