Kyle Mooney net worth and salary: Kyle Mooney is an American actor, comedian, and writer who has a net worth of $3 million. Kyle Mooney was born in San Diego, California in September 1984. Mooney co-founded the sketch comedy group Good Neighbor. In middle school he was voted most likely to become a TV star and in high school he was named class clown and won best Actor in Shakespeare's The Tempest. He studied film at the University of Southern California and performed with the group Commedus Interruptus. In 2011 he appeared on Sports Show with Norm Macdonald and from 2010 to 2011 on the TV series Pretend Time. In 2013 Mooney starred as Rory in the TV series Hello Ladies. He debuted as a featured player on Saturday Night Live in 2013. Mooney has also starred in many web series and shorts. He wrote for the TV series documentary Nathan for You in 2013. He appeared in Zoolander 2 in 2016 and in 2017 appeared in the movie Brigsby Bear, which he also co-wrote. 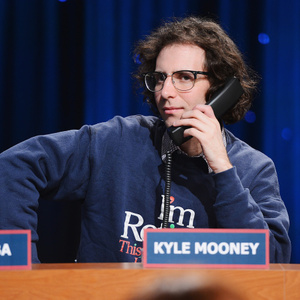