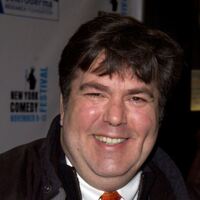 Kevin Meaney net worth: Kevin Meaney was an American stand-up comedian and actor who had a net worth of $2 million at the time of his death. Kevin died on October 21, 2016 at the age of 60.

Kevin Meaney was born in Valhalla, New York in April 1957. Kevin started his comedy career in 1980. He had the first HBO comedy special in 1986 and debuted on The Tonight Show in 1987. Meaney went on to appear on Late Night with David Letterman, The Oprah Winfrey Show, Conan, and Regis and Kathy Lee. From 1990 to 1991 Meaney starred as Buck Russell in the television series Uncle Buck. In 1994 he voiced he role of Aloysius Pig in the TV series Garfield and Friends. From 1988 to 1999 he did voice work for the series Mad Jack the Pirate. Meaney appeared in the movies Big, Plump Fiction, Shut Up and Kiss Me!, Heterosexuals, Are You Joking?, Hey Monster, Hands Off My City, and Blood Ransom. He released the comedy album That's Not Right in 2004 which is also his catchphrase. In 2008 he announced that he was gay and divorced his wife.