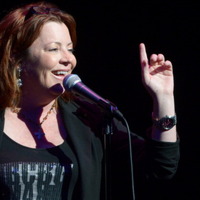 Kathleen Madigan net worth: Kathleen Madigan is an American comedian and television personality who has a net worth of $1.5 million. Kathleen Madigan was born in Florissant, Missouri in September 1965. In school she was the shortest person to ever win the Mid-Missouri Hoops Shoot Championship in basketball. She graduated from Southern Illinois University Edwardsville and was in charge of the student newspaper. She worked in print journalism and did open mic nights. Madigan has appeared on the TV series Last Comic Standing, Celebrity Poker Showdown, Comedy Central Presents, The Tonight Show with Jay Leno, Late Show with David Letterman, Late Night with Conan O'Brien, The Late Late Show with Craig Ferguson, and The Bob and Tom Show. Madigan also hosts the show Blue Collar Comedy on Sirius XM Radio. She won Funniest Female Stand-Up Comic at the American Comedy Awards in 1996. She has released four CDs and three DVDs. Madigan appeared on two seasons of the series Last Comic Standing and also worked as a talent scout for the show.