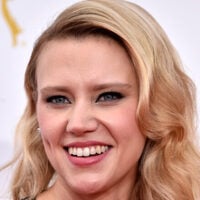 Kate McKinnon Net Worth and Salary: Kate McKinnon is an American actress and comedian who has a net worth of $9 million. Over the years, McKinnon has become famous for her performances on various sketch shows, often doing hilarious impressions of high-profile celebrities. After making a name for herself on "The Big Gay Sketch Show," Kate moved to "Saturday Night Live," where she remains as of 2020. McKinnon quickly became a fan-favorite at SNL.

Outside of her sketch comedy work, Kate has appeared in a number of high-profile films over the years. Over the course of her career, she has been nominated for eight Primetime Emmy Awards. She managed to win one Emmy in 2016, and another in 2017. McKinnon is also famous for her love of cats, and she has a segment called "Whiskers R We" on "Saturday Night Live" which highlights this fact.

Early Life: Kathryn McKinnon Berthold was born on January 6th of 1984 in Sea Cliff, New York. Raised alongside a younger sister in a middle-class family, Kate's father passed away when she was 18. During her youth, McKinnon fell in love with music and learned how to play several instruments, including the piano, the cello, and the guitar. She also dived into acting and impressions from a young age. One of her earliest memories of performing was during fifth grade, when she used an English accent to impersonate the Queen of England in front of her classmates.

After graduating from high school in 2002, Kate attended Columbia University. She studied theatre and co-founded her own comedy group that she called Tea Party. One of her focuses during her college years was musical improv comedy. She also appeared in many of the university's shows and joined a comedy group that specialized in pranks.

Career: Kate's career began in earnest when she joined the cast of "The Big Gay Sketch Show." For the next three seasons, McKinnon was a regular cast member. During this period, she also performed live sketch shows in New York City and began her voice acting career. Some of her early voice acting gigs at this point included animated series such as "The Venture Bros.," "Robotomy," and "Ugly Americans."

By 2009, Kate was a widely-recognized comedian, and she was awarded the NewNowNext Award for Best Rising Comic. Further award nominations followed before she pushed forward with her voice acting career. To date, Kate has voiced characters in shows like "The Simpsons," "Family Guy," "Magic School Bus," and "Nature Cat."

In 2012, McKinnon joined the cast of "Saturday Night Live." Although she began as a featured player, she was promoted to a more central position by 2013. Also in 2013, McKinnon was nominated for an Emmy Award for Best Supporting Actress in the Comedy category. More award nominations followed over the last few years, and Kate was especially praised for her comedic songs. In 2016, she finally won an Emmy for her work with SNL, becoming the first cast member to do so since Dana Carvey 23 years prior.

During her time on "Saturday Night Live," Kate became well known for her celebrity impressions. 2016 became an especially notable year, because this was when she first started to do an impression of Hillary Clinton (a woman that she greatly admired). She has also done impressions of political figures like Kellyanne Conway and Elizabeth Warren. Outside of political figures, many fans know Kate for her hilarious impressions of Justin Bieber. Over the years, she has also taken on the roles of countless other celebrities, including Shakira, Bella Hadid, Ellen DeGeneres, Iggy Azalea, and many others.

In terms of film work, one of McKinnon's most notable roles came in 2016, when she voiced a character in the incredibly popular animated film "Finding Dory." That year, she also starred in the reboot of "Ghostbusters." Prior to this, she had appeared in films such as "Balls Out," "Ted 2," and "The Angry Birds Movie." Kate is also known for starring in movies like "The Spy Who Dumped Me" and "Yesterday."

McKinnon has worked extensively behind the camera as well. She has created a web series called Notary Publix with her sister Emily Lynne. In 2019, Kate teamed up with her sister once again to release the Audible audio series "Heads Will Roll."

Brand Endorsements: Kate McKinnon has supplemented her income over the years with a number of brand endorsements. In 2015, she appeared in a series of advertisements for the new Ford Focus.

Relationships: McKinnon has been openly gay for many years. In 2020 during the 77th Golden Globe Awards. Kate personally thanked Ellen DeGeneders for being supportive and making it "less scary" to accept her true self while she was watching the sitcom "Ellen." During her college years, McKinnon dated Bari Weiss, a future journalist. Another notable relationship came when she dated photographer and actress Jackie Abbott.

If a cast member makes it to their fifth season, they make $15,000 per episode, which equates to an impressive $315,000 per season. The highest salary that can be reached at SNL is for people who have been there for an extremely long period of time, or for individuals who are very important to the show. These high-earning individuals make $25,000 per episode, which equates to $525,000 per year. It is likely that Kate McKinnon's salary is on the higher end of that spectrum.