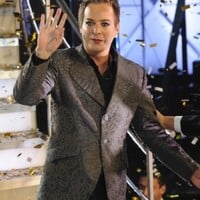 Julian Clary net worth: Julian Clary is an English comedian and novelist who has a net worth of $5 million. Julian Clary was born in Surbiton, Surrey, England in May 1959. Clary was the winner of the reality television series Celebrity Big Brother 10 in 2012. In 1992 he starred as Julian in the TV series Terry and Julian. From 2006 to 2007 Clary voiced the role of the narrator on the series Little Princess. He has starred in the movies Carry on Columbus and The Baby Juice Express. He has been featured on the TV series It's Only TV… But I Like It, Strictly Come Dancing, Your Face Sounds Familiar, Big Brother's Bit on the Side, Give a Pet a Home, and Loose Women. Clary has released the stand-up comedy movies The Mincing Machine Tour, My Glittering Passage, and Live – Lord of the Mince. He has authored the books My Life With Fanny The Wonder Dog, How To Be A Man, A Young Man's Passage, Murder Most Fab, Devil in Disguise, and Briefs Encountered. Clary is openly gay.