Judy Gold net worth: Judy Gold is an American stand-up comic and writer who has a net worth of $3 million dollars. Judy Gold was born in Newark, New Jersey, and began performing stand-up while in college. Her friends dared her to get up on stage, and a new career path was born.

She went on to perform stand-up all over the world, and is most widely recognized for her writing work and her theater projects. She won two Emmy Awards for writing for The Rosie O'Donnell Show, which she also produced. She also worked on All-American Girl, and is the host/interviewer for HBO at the Multiplex. She was a regular guest on Tough Crowd with Colin Quinn, and in 2011 started touring as a one-woman show with The Judy Gold Show: My Life as a Sitcom. In addition to her television writing and producing work, she has also written or co-written multiple successful one-woman shows, including 25 Questions for a Jewish Mother, which is a series of stories and anecdotes about her own mother and her life as a lesbian mother of two boys, Henry and Ben. Gold was featured in the film, Making Trouble, a tribute to female Jewish comedians that was produced by the Jewish Women's Archive in 2007, and in 2011 was named a Givenik Ambassador. In 2014, she appeared on the reality series, Celebrity Wife Swap where she traded lives with Penn Jillette, the infamous illusionist, comedian, and actor who is best known for his work in the team, Penn & Teller. 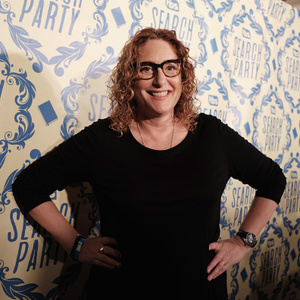