What is John Cleese's Net Worth?

John Marwood Cleese was born on October 27th, 1939 in Weston-super-Mare, Somerset, England — the sole child of Reginald Francis Cleese, who was an insurance salesman, and wife Muriel Evelyn. Cleese's family surname was originally Cheese, but his father found it to be embarrassing and opted to use Cleese when enlisting in the Army during World War One.

Cleese began his early education at St Peter's Preparatory School where he received awards for his firm command of the English language and literature. Cleese also excelled at such extracurricular activities as cricket and boxing. At age 13, Cleese was awarded an exhibition at Clifton College, a prestigious English public school located in Bristol.

John Cleese was incredibly erudite, which gave him the ability to teach several subjects before enrolling at Downing College, Cambridge. He started acting with the Cambridge Footlights and graduated in 1963.

John Cleese began writing scripts early and found a place as a cast member for the 1963 Footlights Revue — which was wildly successful at Edinburgh Festival Fringe. With the Footlights Revue, Cleese would come into contact and work with future writing partner Graham Chapman. The Cambridge Footlights became known as the Cambridge Circus, thereafter, traveling internationally.

Cleese's traveling revue brought him to New York, where he appeared in multiple Broadway and Off-Broadway productions and was, as a result of his efforts, offered a job as a writer for BBC Radio. This time of his life would put Cleese in touch with future Python Terry Gilliam, as well as American actress Connie Booth.

Cleese worked for "The Dick Emery Show" as well as "I'm Sorry, I'll Read That Again". It was his work on "The Frost Report", that gave Cleese his first appearance on British comedic television and also put him in touch with future Pythons Eric Idle, Michael Palin, and Terry Jones as well. 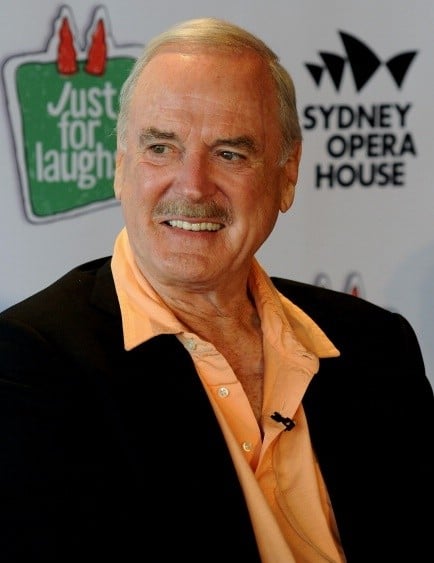 Cleese worked with Chapman extensively leading up to their success as Monty Python, first writing episodes for the "Doctor in the House". Creative and lifestyle differences encouraged further collaboration, which inspired Cleese and Chapman to bring in Gilliam, Jones, and Idle. Thus, Monty Python was born.

"Monty Python's Flying Circus" had a successful four-season run from October of 1969 to December of 1974 on BBC Television. Cleese made the decision to quit the Circus after its third season. Cleese's famous contributions include "The Ministry of Silly Walks", portrayals of stressed-out intellectual loonies, and his "Sergeant Major "character.

After the Circus, Cleese remained friendly with the now famous group of writers/comedians. The group began its efforts writing feature films, which include "Monty Python and the Holy Grail", "Monty Python's Life of Brian", as well as "Monty Python's The Meaning of Life" — all of which are considered topflight comedies and hugely influential when it came to inspiring up-and-coming writers and comedians.

Cleese would go on to co-write the beloved TV series "Fawlty Towers" with his wife, Connie Booth — both ended up starring in the show. Cleese also starred in "Clockwise" and "A Fish Called Wanda". His other film and TV credits include "George of the Jungle", "The Out-of-Towners", "The World Is Not Enough", "Harry Potter and the Philosopher's Stone", "Harry Potter and the Chamber of Secrets", "Die Another Day", "Charlie's Angels: Full Throttle", "Cheers", and "Whoops Apocalypse".

John Cleese has been married four times, most recently to Jennifer Wade in 2012. He has two children. When Cleese divorced his third wife Alyce Faye, in 2008 after 16 years of marriage, the comedian was ordered to pay her a $20 million settlement plus $1 million a year through 2016.

Cleese joined forces with other members of the Python gang once again in order to assist such charitable endeavors and causes as Amnesty International, and Cleese himself has been a long-standing supporter of the Liberal Democrats. In 2008, Cleese expressed his support for presidential candidate Barack Obama and even offered up his services to the former commander in chief as a speech writer. He also has an asteroid (9618 Johncleese) named in his honor. Cleese is also well-known for his love of lemurs.

In 2016, Cleese went on record and criticized Donald Trump's US Presidential run, describing the former president early on as "A narcissist, with no attention span, who doesn't have clear ideas about anything and makes it all up as he goes along".

Cleese himself has been known to make occasional appearances on the Cornell campus that are always well-received.

In 1999 John paid an undisclosed amount for two side-by-side parcels in Montecito that combined into a 15+ acre equestrian ranch. He listed the home for sale in July 2007 for $28 million. In July 2008 he accepted a $16 million offer from cellular technology billionaire Craig McCaw.

In 2018 John announced he was leaving England after being disappointed by Brexit. He listed a home near Bath for $3 million and and a London apartment for $1.75 million. At the time he announced his intention to relocate to the Caribbean island of Nevis.